If those firemen had arrived, they would have found the basketball nets fully engulfed in flames.

In what was the Bears best offensive outing of the year – as well as several previous years – HCHS put on a shooting clinic and surpassed the century mark in the process by defeating Eastern Randolph, 106-54, in the opening round of the NCHSAA Class 2-A state play-offs.

For the game, the Bears connected on 43 total field goals, to include eight from behind the three-point arc. They also added 12 made free throws.

Additionally, all five HCHS starters scored in double figures, led by a combined 46 points from Jaquarii Roberson and Zion Riddick.

“I thought we did a great job in sharing the ball and finding the open man,” said veteran HCHS head coach Charles Simmons as he watched his team improve 18-8 overall as well as bounce back from a disappointing loss on Friday vs. rival Northeastern High School in the championship game of the conference tournament. 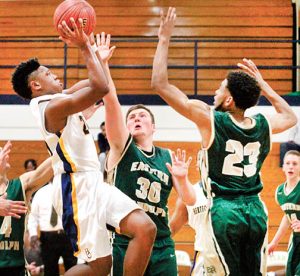 Hertford County’s Lance Hunter (left) drives to the basket against Eastern Randolph defenders Nathan Cockman (#30) and Dezman Austin during Tuesday night’s state play-off opener in Ahoskie. Hunter was one of five Bears to score in double figures as HCHS advanced to round two with a 106-54 victory. | Staff Photo by Cal Bryant

“Defensively we did a good job of limiting Eastern Randolph to one shot when they were on offense,” Simmons continued.

While it was apparent from the opening tip-off that Hertford County was able to overwhelm their guests with speed, Eastern Randolph did use one stretch early in the second quarter to make things interesting.

Trailing by 12 (33-21), the visiting Wildcats used a deuce from Nathan Cockman and a trey by Malik Herbert to close their deficit to 33-26 less than 90 seconds into the second period.

But the hot-shooting Bears were up to the task. By the midway point of the period, HCHS was up 49-26 thanks to an offensive spurt sparked by Riddick who scored eight of his 20 points over a stretch of three and one-half minutes. Three of those baskets were lay-ups off a lethal fast-break offense.

“We were able to push the ball in transition and finish with baskets,” coach Simmons observed.

Even with a comfortable 23-point lead at that stage of the game, the Bears offense kicked it into high gear. A pair of Deandre Beverly baskets sandwiched around a Roberson trifecta finished a run of 21 unanswered points as the lead swelled to 30 points (54-26).

HCHS remained hot to close the first half, using eight straight points from Roberson (who scored a game-high 26 points) and the lead topped 30 points (65-33) at halftime.

As things turned out, the Bears did not need to score a single point in the second half to collect the win. However, HCHS kept its foot on the gas.

Another 8-0 run – this one fueled by baskets from Roberson, Delmonta Cherry and Talik Totten – allowed HCHS to maintain its huge lead (75-39).

With the game clock running continuously in the fourth quarter due to the mercy rule, a mixture of HCHS starters and reserves got in on the action.

Back to back baskets from Lance Hunter and Dana Goodman pushed the lead over 40 (91-49) to open the final period of play. HCHS closed the game on a 13-0 run sparked by a trio of baskets from Ferlin Ophelia to account for the 52-point victory.

“This was our best game all year. Now we have to build on that momentum for our next game on Thursday night,” noted coach Simmons.

The Bears will be back in action at 7 p.m. tonight (Thursday) when they host Warren County High School in the second round of the state play-offs.

Smile at the birdie!