ELIZABETH CITY – After winning twice thanks to four overtimes, Hertford County was hoping to avoid another extra period of play in their third game with Northeastern Coastal Conference rival Northeastern High.

They just hoped it would mean the Bears were coming out on the winning end.

Instead of getting the hat-trick (three straight wins) Hertford County came up short in the NCC Tournament 68-56 to the Eagles on Northeastern’s home floor.

Damar Sutton led all players with 31 points for the Eagles while Talik Totten had 20 for Hertford County and another 14 points added by Jaquarii Roberson.

The Bears fought off five separate ties in the game but never could regain the lead after the opening minutes of the second quarter.

Roberson broke the first tie in the first quarter with a short jump shot, and then gave the Bears their only lead with a pair of free throws.  But Northeastern tied it and re-took the lead before Roberson came through with a lay-up that made it 10-10. Sutton later scored on a drive in the lane for a 14-10 Northeastern lead before an exchange of baskets just before the buzzer had the Bears trailing by a point, 16-15, after one period of play. 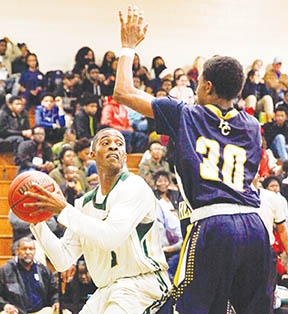 Another short jumper by Roberson put Hertford County back in front, 17-16, before Northeastern scored four in a row.  Neither team could sustain a scoring run, and the Bears never let the Eagles lead by more than four points in the first half.  A 7-2 run by Totten alone for Hertford County got his team within one, 28-27.  Sutton’s lay-up put the Eagles on top by four, 33-29 before Roberson drove the lane and made it a two-point game at the break, 33-31, Northeastern.

It was still checkmate early in the third quarter before Totten drilled a short jump shot that tied it, 35-35.  Northeastern countered, but Zion Riddick’s basket knotted the game one more time, 37-37.  Riddick later made one-of-two free throws that tied it one last time, 41-all, but the Eagles outscored Hertford County 10-to-2 to end the period, with Sutton scoring the last five for a 51-43 Northeastern lead headed to the fourth.

Sutton opened the final frame with a put back for a 10-point Northeastern lead 53-43.  The Bears made a 10-2 run and got their deficit down to four points. 55-51, with under four minutes to go. Sutton missed the second of a one-and-one and the Bears converted into a Totten triple and the lead was just two points, 56-54.

But then the Bears ran out of gas.  Sutton scored the final field goal, and then went to the line to help the Eagles salt it away, making nine of ten foul shots.  Totten’s final lay-up broke the string; but by now, the Eagles had broken the hearts of the Bear faithful.  Three of four foul shots nailed the coffin shut and the Eagles were NCC Tournament champs.

The Bears head to the playoffs on a record of 17-8.  At the end of the tournament, Roberson was named league ‘Player of the Year’ while ‘Coach of the Year’ honors went to Hertford County’s Charles Simmons.

Hertford County is a six-seed in the NC High School Athletic Association 2A state playoffs and open at home on Tuesday at 7 p.m. against Eastern Randolph.