In a close first half, Hertford County’s offense sputtered but they clung to a one-point lead, 33-32, at half-time. 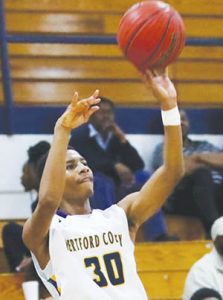 With six points from Talik Totten and five from Zion Riddick, the Bears outscored the Aces 17-to-5 in the third quarter and led 50-37 headed to the fourth.

Hertford County kept up their scoring pace and won the final quarter 15-to-9 and went on to score a 19-point conference victory.

Riddick led the Bears in scoring with 20 points, total.  Rounding out the numbers were Delmonta Cherry with a season-high 14 points, Totten with 13, and Jaquarii Roberson with 10.  Rayshawn Beamon scored five while Lance Hunter added three.

“We played well in the first quarter, but we had a mental lapse in the second quarter and thus it was close at halftime,” said coach Charles Simmons. “In the second half we had better defensive intensity.  We also had balanced scoring, so it was a good win to pick up on the road.”

Hertford County raised its record to 15-6 on the season and 10-0 in conference play. After Wednesday’s First Flight game, the Bears will close out the regular season on the road in Windsor Friday against rival, Bertie.