Jaquarii Roberson (24) and Zion Riddick (16) accounted for 40 points between them as Hertford County upped their overall record to 14-6 and 9-0 in league action. Talik Totten added 15 with five for Dana Goodman, four for Dunyasha Porter, and two apiece for Rayshawn Beamon and Lance Hunter. Lavernon Randall had 14 points for the Aces. 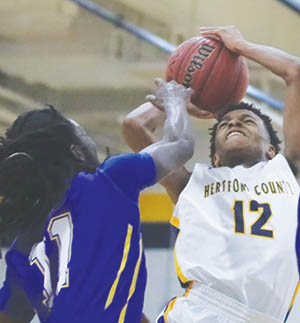 “I was pleased with our effort to come back at the end of the third quarter like we did,” said Hertford County coach Charles Simmons. “This was a big win to remain undefeated in the conference.”

Edenton jumped out to a four-point lead after the first quarter, 18-14, then watched Randall drain a triple and Clayvion Everett hit a short jumper to open the second that made it 23-14. After matching shots to get within five at 25-20, Edenton went on an 8-0 run to take their biggest lead of the game 33-20. But Hertford County closed out the half with a 9-2 run of their own to trail 38-29 at halftime.

Neither team could establish ground early in the second half as Edenton maintained a 10-point lead, 43-33.   But led by Talik Totten, Hertford County broke loose for a 14-2 run and seized the lead on a three-point play by Roberson, 47-45. But Randall and Luke Hoggard scored late in the third to give the lead back to the Aces, 49-47, entering the fourth quarter.

After an exchange of baskets, Riddick drove the lane and tied the game for the second time, 51-all. Roberson followed that with a jump shot, but the Aces answered to tie it again, 53-53. But Roberson wouldn’t be denied. He hit a three-pointer, then was fouled on a lay-up and made the free throw for a 59-53 Bear bulge. Edenton never recovered, though they would get it down to three points, 62-59, with a minute remaining. The margin was just two, 64-62, after Everett hit a three-pointer for the Aces, but Riddick made four free throws in the final 30 seconds to preserve the Hertford County win.

The Bears will have a return game with the Aces in Edenton tonight (Tuesday) before hosting First Flight Wednesday at home.