AHOSKIE – Hertford County put some distance between themselves and the rest of the field here Tuesday night as they turned back Northeastern High – again in overtime – 75-73.

Zion Riddick paced the Bears with a career-high 25 points – 13 in the fourth quarter – while teammate Jaquarii Roberson had 18, including the game-winning free throws, and Talik Totten added a dozen.  Taleik Overton was top point-producer for the Eagles with 19.

The Bears overcame a 19-point deficit to pull out the victory.

“This was a great team win,” said Bears coach Charles Simmons. “We had a good team effort just from believing we couldn’t lose. We didn’t give up when we got 19 down.” 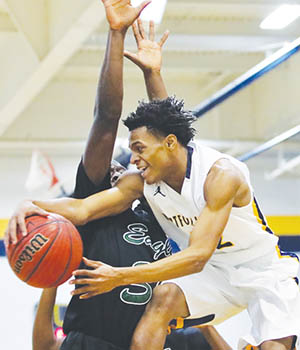 Hertford County’s Zion Riddick (in white) passes around a Northeastern defender in Tuesday night’s game in Ahoskie. The Bears beat the Eagles 75-73 in overtime for the second time this season and outright first-place in the conference. | Dynamic Photo / William Anthony

After surrendering the game’s first five points, the Bears stormed back to lead 6-5.  But Overton got a lay-up in the paint and the Bears never led again the rest of the period.    They did scrap back – getting within a point on a three-pointer by Totten, 20-19, but trailed 25-19 after the first quarter.

Northeastern opened the second quarter on a 13-5 run, and it got no better for the Bears.  A Roberson jump shot quelled the Eagles run, but Northeastern continued to pour it on, building a lead of as many as 19 (47-28) with five minutes left in the half before settling for a 47-33 lead at the mid-break.

An 8-2 run opened the second half for Hertford County, getting the home team within nine, 49-40.  Northeastern was able to stretch it back out to five before Lance Hunter, Totten, and Riddick hit three jumpers back-to-back-to-back, allowing the Bears to only trail by nine (57-48) headed to the fourth quarter.

Hertford County looked doomed again, as the Eagles upped their lead to 11 points, 63-52, but no Bears fans headed for the exits.  Good thing, too, because they would’ve missed Riddick almost single-handedly taking the team on his back and scored 11 of the Bears’ points, and all but 13 as his jump shot with :04 seconds left gave Hertford County their first lead since it was 5-0.  However, Damar Sutton’s turnaround jump shot right at the buzzer sent the game into overtime, knotted 65-65.

After exchanging buckets early in the extra period, Roberson gave the Bears their next lead, 69-68.  The Eagles then made three-of-five – first tying it at 69, then getting a two-point lead.  But Roberson was fouled on the trip upcourt and he made both foul shots to tie it at 71-71.  Riddick untied it with a jump shot for a 73-71 Bear lead, and then the Eagles’ Overton made a pair to make it 73-73.  As time ticked away for both teams, Hertford County held for the last shot.  But it would come down to Roberson being fouled and making both ends of the double-bonus with just one second on the clock.  The Eagles tried a no-good desperation heave, and for the second time this season, the Bears had triumphed over the Eagles – again doing it in overtime.

“We showed a lot of heart, character, and discipline at the end of the game to win,” said Simmons.

Comfortable with a two-game lead over Northeastern (13-3; 5-2, NCC) in the standings, Hertford County (12-6; 7-0) will host Pasquotank tomorrow (Friday) night before welcoming Edenton Holmes to the Bear’s Den on Saturday.