AHOSKIE – They both knew where they were headed.

Two-sport star Jaquarii Roberson signed with Wake Forest University, spurning East Carolina, Old Dominion, and N.C. State.   Roberson finished his prep career with 176 receptions for 3,499 yards and 43 touchdowns.  This past season he had a team-high 76 receptions for 1,370 yards and 15 touchdowns in leading the Bears to the third round of the 2AA NC High School Athletic Association playoffs. He never missed a season, despite suffering a torn meniscus in his right knee at the end of the 2015-16 basketball season. 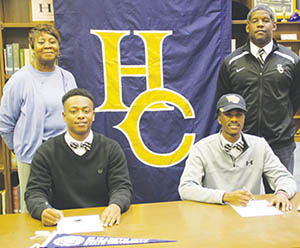 “Wake Forest stayed on me, stayed with me all through my surgery,” Roberson said. “When I got there they said they saw something in me, and I just said to myself, ‘I like this’”.

Roberson said he’s prepared for ACC football, not intimidated at all facing the Clemson’s, Florida State’s, and North Carolina’s.

“I know I’ll have to bulk up and work on my quickness,” he added. “I’ll be one of three receivers they recruited this year, and there are two spots open; I hope I can fill one of them.”

While not certain, just yet, of a field of study, Roberson says he’s considering business, architecture, and even physical education, because he’d like to try his hand at coaching.

“My family feels good about it,” he continued. “I like Wake Forest being a small school all to itself.  I didn’t want to be too close to home.”

While a two-sport athlete in high school, Roberson says he plans to concentrate mainly on football.  However, he did leave the door open to the possibility of playing on the hardwood at Lawrence Joel Coliseum in Winston-Salem.

“If I get the chance, I’m playing both,” he said with a smile.

Greg Harrell on the other hand had his mind made up from the time Elizabeth City State offered earlier this winter.

“They were it,” he said. “It feels good to be playing so close to home.  I hope I can be a tight end in college with my size, but I played defensive end in high school, so it really doesn’t matter as long as I can get out there on the field.”

Harrell says he’s ready for the hard work it will take to succeed at the next level. He leaves HCHS with a stellar senior season of 43 tackles, three-and-a-half sacks, one fumble recovery, and one pass deflected, playing his defensive end position.

“I’m going to have to work hard for it,” he noted. “Nobody’s going to give it to me; you’ve got to work for everything.  I know I’ve got to get my weight up.”

Harrell also says he’d like to try his hand at coaching once his college days as over; and adds that he plans to major in physical education.

“Two colleges are getting great student athletes and more than anything, great young men who have put the work in on the football field as well as in the classroom and the results show it,” Bears head football coach Terrance Saxby said. “While Jaquarii is the highest recruit we’ve had at the school since 2009 (Antonio Vaughan); Danny Dembry now becomes Hertford County’s second receiver to attend Wake Forest.  Both said they feel comfortable with their (future) coaches.

“While Greg was a late signee, he had a great junior year, and a stronger senior year.  I’m just glad somebody noticed he put in the hard work and did everything he could possibly do.  I’m proud of them both and know they’ll both do great things.” Saxby acknowledged.