AHOSKIE – Maybe it was the familiarity.

Hertford County had taken one game this season from Northeastern, though it came in the News-Herald Holiday Classic, so they knew what to expect from the Lady Eagles.

Maybe Northeastern didn’t expect such persistence from the Lady Bears. 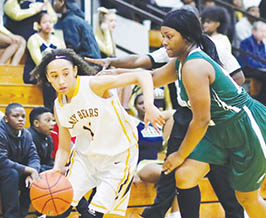 Hertford County won its first conference game of the season Tuesday night with a 48-42 overtime victory here on its home floor.   Northeastern had led by as many as seven early on, and by five as late as the final minute of the game before the Lady Bears pulled out the win in the extra frame.

The game was tied three times in the first quarter, including when the horn sounded ending the period at 6-6.

Northeastern opened the second quarter on a 7-0 run, but a 7-2 Bears’ run got the home team within two at 15-13.  However, Northeastern got a three-pointer and a foul shot to head to the locker room ahead by six, 19-13.

Griffin’s jump shot early in the third quarter gave the Eagles their largest lead at 21-13.  But two scores by Howard – including a triple – shrank the lead down to three again, 21-18.   The Bears trailed by four, 24-20, headed into the fourth and final quarter.

Weaver and Howard combined to get the lead down to three points before Howard let fly a trey and knotted the game for the first time since the first quarter, 26-all.  Unfazed, Northeastern built back a lead before Howard came through again, and Hertford County had whittled it down to two, 34-32.  Weaver was fouled with less than a minute to play and her two foul shots made it a one-point game, 37-36, with 35 seconds left in regulation.  After Northeastern made a free throw, it was Weaver again, this time with the game-tying free throws that sent it to overtime, 38-38.

Howard opened the extra period making one-of-two from the line, and that began a 7-0 Hertford County run.  Northeastern never led in overtime as Howard, then Ashlee Weaver, put the exclamation point on this one – the Lady Bears’ first win in league play.

Hertford County (3-14; 1-6, NCC) will next have back to back games this weekend: Pasquotank on Friday and Edenton Holmes on Saturday – as they go seeking a second conference win in a row.