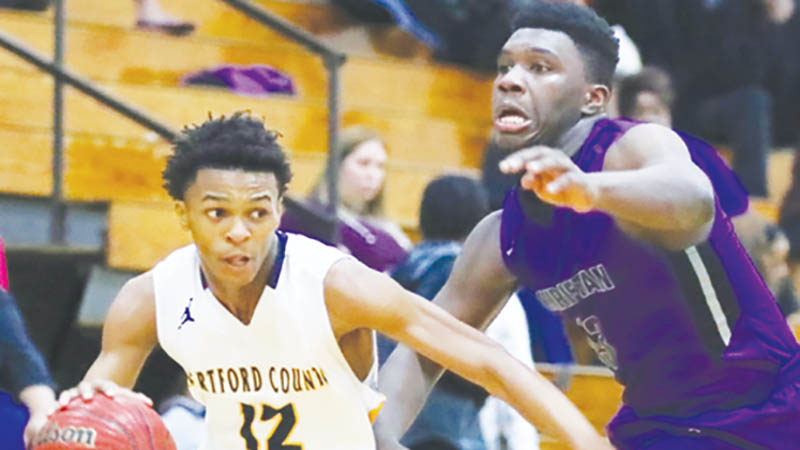 Hertford County’s Zion Riddick drives on a defender in a recent game. Riddick scored a dozen points in Barco Friday night as the Bears went to 6-0 in league play with a 58-50 win over Currituck County. | Dynamic Photo / William Anthony

Clinging to just a three-point lead, 26-23, at halftime, and only a two-point lead , 36-34, after three quarters, the Bears revved up their engines in the final quarter and went on to outscore the Knights 22-16 in the fourth to post the eight-point win.

Jaquarii Roberson was high scorer for Hertford County, leading the way with a 19 point performance – 13 of those points coming in the fourth quarter.  Rounding out the scoring for the Bears were Zion Riddick with 12, Talik Totten with nine and Lance Hunter with five points.  Other scorers included: Rayshawn Beamon with four, Ferlin Ophelia with three and two points each from Delmonta Cherry, Deandre Beverly, and Dunyasha Porter.

“It was a good conference win on the road,” said Bears coach Charles Simmons. “We played well down the stretch to pull this one out.”

Hertford County remains undefeated in 2A NCC league play at 6-0 in the conference.

The Lady Bears are 2-14 overall and yet to win in conference play (0-6) before they play Northeastern Tuesday night at home.