Down eight points at halftime, 35-27, the Bears rallied, but were still at a deficit, 47-44 after three quarters. 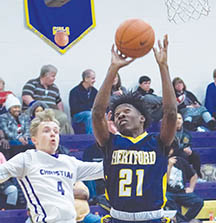 Hertford County kept pecking away and finally tied the game at 56-56 with one minute left in the game, but the Bears had nothing left the rest of the way as King’s Fork pulled away and went on to win by seven.

The Bulldogs outshot the Bears at the free-throw line 23-to-3.

Leading scorer for Hertford County, Jaquarii Roberson, did not make the trip across the border.  Instead scoring honors were left to juniors Talik Totten with 19 and Zion Riddick with 17 points, respectively.  Rounding it out were Rayshawn Beamon with eight, Delmonta Cherry with six, Lance Hunter with four, and two for Dunyasha Porter.

“I was pleased with the team effort,” said Bears coach Charles Simmons. “We played well enough to win, but we have to have better execution at the end of close games.”

Hertford County is now 11-6 overall and will host Northeastern at home tonight (Tuesday) as they resume 2A Northeastern Coastal Conference play.