The game was tied at 27-all at halftime, and was still knotted up with four minutes left in the contest, but South Central pulled away for the nine-point win. 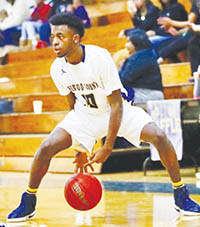 Jaquarii Roberson led the Bears with 18 points.  Rounding out the scoring were Rayshawn Beamon with 13, eight for Talik Totten, five for Zion Riddick, and two each for Delmonta Cherry, Dunyasha Porter, Lance Hunter, and Deandre Beverly.

“It was a tough game against a very good team,” said Bears coach Charles Simmons. “We had our chances, but we need to have better execution on offense and not turn the ball over.”

Hertford County falls to 10-5, while South Central raised its record to 16-1.  The Bears played in Barco at Currituck last night in a game not completed by press time.  They will play at King’s Fork High School in Suffolk, VA tonight (Saturday) in a 6:30 p.m. showcase game.

Hertford County was 2-13 going into Friday’s game at Currituck.  Next up for the Lady Bears will be Northeastern at home Tuesday when they return to Northeastern Coastal Conference action.