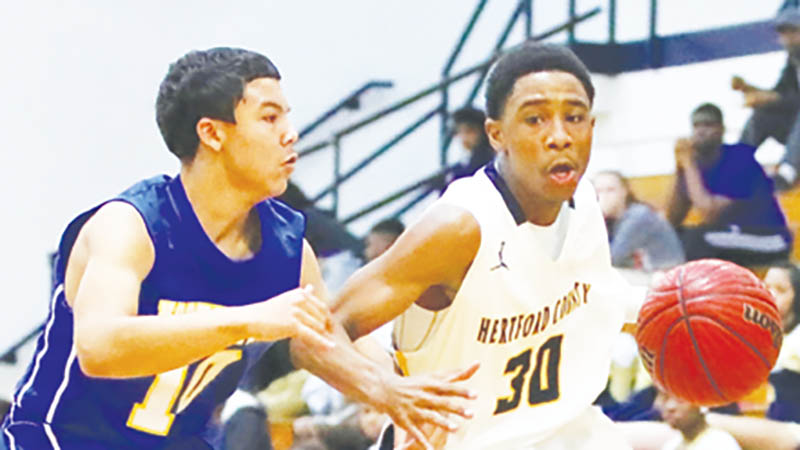 AHOSKIE – Using a one-point loss that started a three-game losing slide as newfound inspiration, Hertford County regrouped in the second half of the return match-up and went on to thrash Norfolk Christian 83-66 in a rare Saturday night home court special.

Jaquarii Roberson had 31 points – one night after scoring 32 at First Flight – to lead the Bears’ scoring.  Teammate Talik Totten had 23 and Zion Riddick added 11.

“We had a slow start, but it ended up being a great team effort,” said Hertford County coach Charles Simmons. “After the first quarter we picked up our defensive tempo, forcing turnovers, and finishing at the basket.  This was a good non-conference win.”

After Roberson’s first jump shot, the Ambassadors went on a 15-2 run and it looked like history was going to repeat itself from the 81-80 loss back in December.  The Bears trailed it 15-4, but strung together a 11-2 run of their own to get within three at 18-15.  Delmonta Cherry got a lay-up and was fouled, making the free throw to get the Bears within a point, 19-18.  Dana Goodman then hit his only shot of the game – a long-range jump shot – that made it 20-19, Bears, after the first quarter.

Neither team could establish runs – or get stops – as the second quarter opened.  That led to a pair of ties and ten lead changes between the two teams before Roberson got a driving lay-up and drained a triple from behind the arc for a 41-36 Hertford County lead.  But Norfolk whittled it down to one point before Lance Hunter’s jump shot gave the Bears a 43-40 halftime lead.

Both teams played in spurts opening the second half, with the Bears protecting their lead thanks to capitalizing on Norfolk turnovers.  Ten points off turnovers helped the Bears establish a lead of eleven, 60-49, headed to the fourth quarter.

Totten crushed a three-pointer two minutes into the fourth to give Hertford County a 13-point lead, 67-54.  The lead was eleven, 71-60 when the Bears went on a 9-2 run that sealed their fate. Their lead at 18, 80-62, Simmons called for the spread offense and the Bears closed out the game at the free throw line for the 17-point victory.

Hertford County is now 10-4 after collecting their eighth straight win.

The Lady Bears’ gave the Lady Ambassadors fits before they succumbed to Norfolk, 57-54.  The Ambassadors rose to 13-1 while Hertford County fell to 2-12.