AHOSKIE – Maybe a break from league play was all they needed.

Ty’trice Perry came off the bench to score 12 points in the win; second in scoring only to a 22-point effort from D.L. Watford. 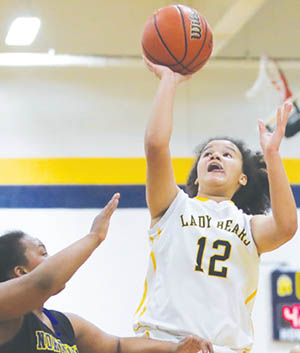 “We played well tonight and got a good win,” said Lady Bears coach Sha-Teisa Sharpe. “Overall it was a great team effort. Ty’trice had a good game for us.”

It looked like some of Hertford County’s old ghosts were going to rear their heads when the Bears fell behind 6-3 after only having Jessica Weaver’s three-point basket to show for the early going.  But Watford and Perry hit big baskets and the game’s first tie score came at 6-6.  Trading buckets the game was tied twice more in the period, including at 10-10 after the first quarter.

An 11-2 run to open the second quarter helped the Bears to an unaccustomed nine-point lead, 21-12, thanks to Perry stepping up once more. Northwest got the deficit back to six points at 22-16 before Watford, Weaver, and Breanna Howard closed out the half with six key points to stake Hertford County to a 29-18 halftime lead.

Attacking the rim and drawing Bear fouls helped the Vikings get back in the game in the third quarter.  Two free throws by Shamya Robinson had it a six-point game, 32-26, with four minutes left in the period.  But a 10-2 Hertford County run thanks to Perry, who still possessed the hot hand, had it 42-28 before the quarter closed with the Bears up, 44-31.

By the 5:18 mark Hertford County had something they hadn’t had all year – a 20-point lead in a ball game, 52-32.   By the three-and-a-half mark remaining, the Bears were ahead 58-32, their largest lead of the night.   They closed out the win at the foul line with Howard draining the last two free throws in the 23-point win.

“Hopefully this will turn our season around,” surmised Sharpe.

After a road trip to Kitty Hawk to face First Flight on Friday, the Lady Bears return home to meet another non-conference opponent, Norfolk Christian, on Saturday.