AHOSKIE – Five Bears’ players scored in double figures as Hertford County stepped out of conference for the first of two games this week and posted a 94-60 win over Northwest Halifax.

Talik Totten led all scorers with 24 points while teammates Delmonta Cherry and Rayshawn Beamon had 13 points apiece.  Daze’ Miller led the Vikings with 18.

“We had a very good team effort tonight,” said Bears’ coach Charles Simmons. “We did a better job in the second half in our transition game in finishing at the basket.  Everybody played and everybody scored for us.”

Indeed, all 11 Bears’ players that dressed out got into the scorebook, but the early part of the game was closer than indicated. 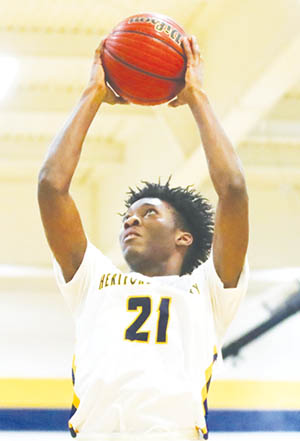 Cherry’s three-point basket broke a 5-5 tie and gave Hertford County a lead they never relinquished.  Northwest came back with a field goal to get within one at 8-7, but the Bears closed out the first quarter with an 11-2 run to head to the second up 19-10.

Hertford County was up eight, 24-16, before they exploded on a 9-0 run and pushed the lead up to 33-16 thanks to a three-pointer and a lay-up from Totten, while Zion Riddick added a pair of free throws and a baseline lay-up. Jaquinton Dale broke the string with a trey for the Vikings, but for there, the Bears outscored the visitors 6-2 to take a 39-21 lead into the locker room at halftime.

Northwest got their deficit down to 14 points at 42-28 early in the second half before Beamon landed a pair of foul shots and a long jumper that pushed the lead back to 18, 46-28. Totten then scored the next six in a row on a pair of jumpers and a pair of free throws.

With the score 52-28 the shooting percentage went up for everybody as neither team seemed to miss; either from the floor, or at the free-throw line.  Still, Hertford County was able to pad more of their lead and had a 25-point bulge, 63-38, after three quarters.

The fourth quarter was all fast breaks and lay-ups.  Both teams did a very poor job of holding on to the ball; and while that frustrated the coaches, the fans must have loved the quickened pace.  Simmons cleared his bench and Northwest’s Gary Warren did the same.  The Bears ended the game making their last five foul shots as they closed in on a 34-point win.

Hertford County is now 8-4.  They return to Northeastern Coastal Conference action Friday against First Flight at Kill Devil Hills, and then are back home Saturday for the return game with Norfolk Christian.