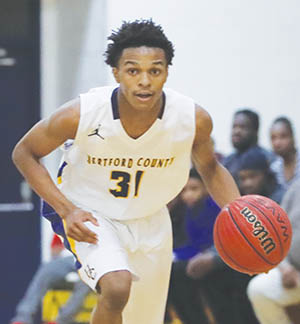 From there the score just kept mounting, first to a 61-37 margin at the end of three quarters as the Bears coasted to the 35-point win.

Jaquarii Roberson – who did all his scoring in the first half – led the attack with 24 points.  Talik Totten finished with 20 points, while Delmonta Cherry had 12 – the only three players in double figures. Rounding out the scoring was: Rayshawn Beamon with eight, Zion Riddick and Lance Hunter with six points each, Jamari Lassiter with three, and two each from Ferlin Ophelia and Dana Goodman.

Hertford County raised its record to 6-4 overall and 3-0 in conference play.

In the girl’s game, Hertford County fell 67-to-55, despite a season-high 27 point performance from D.L. Watford.

MURFREESBORO – It may have made for great television, but these are the games that give coaches grey hairs. The... read more