AHOSKIE – You knew it was coming, the question was when. 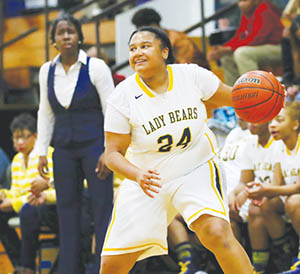 Hertford County’s Jessica Weaver drives for a lay-up against Northeastern in Wednesday night’s 3rd-place game of the Roanoke-Chowan News-Herald Holiday Classic. The Lady Bears won their first game of the season with a 48-31 victory. | Dynamic Photo / William Anthony

Trailing 5-2 in the first quarter, Hertford County took the lead on a Watford lay-up and a long-range three-pointer from Weaver for a 7-5 lead.  Northeastern tied it and re-took the lead on Tasharii Spellman’s field goal; but then Watford scored on a three-point play and followed it with a three-point bomb and the Bears had a lead they never surrendered.  Brianna Howard’s baseline shot made it 15-11, Hertford County, at the end of the quarter.

Hertford County opened the second quarter with a 10-0 run.  Northeastern answered back with a 6-0 run of their own; but during that span Proctor turned her ankle and was hobbled the rest of the game.  Still, the Lady Bears weren’t to be denied, and carried a 28-17 lead into the locker-room at halftime.

That lead rose to 10 points at 31-21 with over three-and-a-half minutes to go in the third quarter.   Northeastern was matching the Bears’ shots, but their failure to get stops earlier told the story.  Watford buried another trey before the horn sounded and Hertford County went into the fourth leading it 37-24.

The Bears continued to pour it on, this time using pressure defense and after a three-point play by Destiny Chavis, Hertford County had a 16-point lead, 43-27, with less than five minutes left to play.  The Bears kept a double-digit lead the rest of the way, winning by their largest margin – 17 points – at the final horn.