AHOSKIE – Plymouth rode a 31-point performance from University of Kansas signee Brittany Franklin then fought off a third quarter comeback before subduing host Hertford County High 69-57 in the girl’s semi-final of the Roanoke-Chowan News-Herald Holiday Classic. 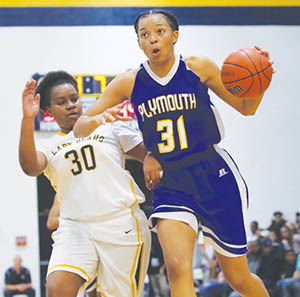 Plymouth broke out to a 7-3 early lead before Jessica Weaver and Ashlee Weaver gave the Lady Bears an 8-7 lead.  Franklin and Mauresha Blount scored for Plymouth before the end of the quarter, and it was 11-8 in favor of the Vikes after one period of play.

A 9-0 Plymouth run opened the second quarter and gave the ladies in Blue a 20-8 bulge.  However, Ashlee Weaver kept attacking inside and drawing fouls; her free-throw shooting slowing getting Hertford County closer.   But Daijah Lewis helped spark a Plymouth rally and soon the Vikings were looking at a 10-point lead, 26-16.  Lewis got another field goal to push the lead to an even dozen before Jessica Weaver ignited a Lady Bear rally that cut the margin to three points, 28-25, with less than two minutes to play.  One more free throw and another from Franklin and Plymouth had a five point halftime lead, 30-25.

Patience paid off the Hertford County starting the third quarter and the Bears were able to pull within two at the 4:50 mark, 32-30; and again at 4:04 when they made it 33-31, Plymouth – both courtesy of Hertford County’s D.L. Watford.  The Bears were down by four when a long-range three-pointer from Jessica Weaver made it a one-point game, 35-34.    But Franklin re-asserted herself – scoring seven of Plymouth’s next nine and allowing the Vikings to begin to pull away.  Their blitz had them ahead 46-39 at the end of the third.

The fourth quarter began with Franklin getting an easy lay-up underneath.  She added four more points as Plymouth opened it up to a 14-point lead, 55-41.  Hertford County got it below double digits with a pair of Jessica Weaver free throws and an Ashlee Weaver three-pointer.  Then Franklin’s supporting cast stepped up: Mauricia Wrighton, Shakeynah Mays, and Lewis pushed the lead to 15 points, 61-46.  Hertford County refused to quit and got it below ten points again before Mays got three scores in a row to dash Bear fans’ hopes and extinguish any fading hopes of a comeback.    Jessica Weaver’s late three-pointer only added to her statistics as the Vikings won by a dozen.

Hertford County (0-7) remains winless on the season and faced Northeastern in the Wednesday night consolation game not done by press-time.

WINDSOR – UNC and Kentucky weren’t the only teams to both top 100 points this past weekend. Bertie High School,... read more