Two Roanoke-Chowan area high school football teams are now just two wins away from playing for the state championship.  But first, Hertford County and Northampton County must win on the road in the East semi-finals in their respective divisions.

Last Friday night Hertford County beat T.W. Andrews in High Point 34-31 in an NCHSAA 2AA second round playoff game.  Lance Hunter ran for his first touchdown of the year from one-yard out with 45 seconds left as the Bears won their sixth straight game.

“It was a tough game,” said Hertford County head coach Terrance Saxby. “We started fast, built a lead, and held on for the win.  We’re happy to survive and advance to the next round.  We played hard and beat a very good team.” 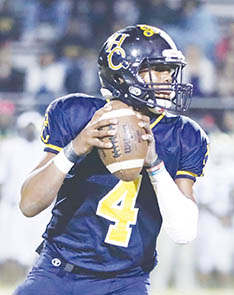 This Friday Hertford County (9-4) is at East Duplin (12-1, and champions of the East Central Conference) in Beulaville.

“East Duplin is very physical, and they like to run on offense,” continued Saxby. “Defensively they are big and athletic.”

The Panthers defense has only surrendered 55 points all season and recorded seven shutouts in 13 games.

Hunter, who leads the Bears, has passed for 2,621 yards and 30 touchdowns.  Leading Bears’ rusher is junior Kyeem Perry with 1,258 yards and nine touchdowns.  The leading receiver is senior Jaquarii Roberson with 68 receptions and 12 touchdowns for 1,178 yards.  Roberson broke his own single-season receiving school record of 66 catches with two receptions in the Andrews game.

This year marks the first time since 2009 that a Hertford County team has advanced to the third round of the playoffs.

Also from the Northeastern Coastal Conference, Edenton Holmes (11-2) and Northeastern (11-2) square off Friday night in Elizabeth City.  There are only four conferences in the state with three teams still alive in the playoffs and the NCC is the only one among the 2A’s.

Last Friday Northampton County beat SE Halifax 42-14.  It was the Jaguars’ second win this season over the Trojans, having won a regular season game back in September.

“We came out slow,” said Northampton coach George Privott of the Jags’ second-round win. “At halftime we made adjustments and in the second half we scored a couple of touchdowns off turnovers.  The offense and defense both played well.”

This Friday Northampton County (7-6) travels to Chocowinity to meet Southside (9-4) in a 1A East semi-final game.

“Southside runs the Wing-T offense with a 4-3 defense.  They have good running backs and like to blitz on defense.  We are familiar with them as they beat us in the second round of the playoffs last year,” Privott continued.

“Offensively, we need to protect the ball and block well,” closed Privott. “We need to start the game better, play all four quarters, and our defense needs to continue to play well.”

Honey of a win!