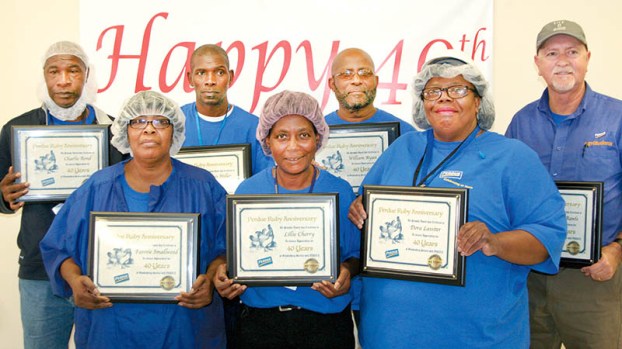 These seven Perdue associates were recognized last week for being employed by the company since the Lewiston plant was opened 40 years ago. They are, front row from left, Fannie L. Smallwood, Lillie W. Cherry, and Dora Lassiter; and back row, from left, Charlie Bond, James H. Miller, William Ryan and Robert Rawls. | Staff Photos by Jennipher Dickens

LEWISTON-WOODVILLE – Four billion chickens: that’s how many birds have been harvested by the Perdue plant here since 1976, according to the company President, Steve Evans.

“With those numbers, everyone in the United States could have eaten 13 chickens,” he remarked.

Evans, along with other company corporate officials as well as many employees of the Perdue-Lewiston poultry processing plant and local public figures, was present Friday at the facility’s 40th anniversary celebration.

In 1974, Perdue announced its plans to build the $8 million plant in Bertie County. That amount today would equate to just over $39 million, accounting for inflation.

On February 26, 1976, the Perdue Lewiston plant began its first day of operation with about 250 employees, making it Perdue’s third broiler plant and one of the largest in the world.

“A lot of people (in this area) thought we were just another company from the north who were going to come in and leave, but here we still are 40 years later,” stated Jeff Stalls, the Perdue Lewiston plant’s Director of Operations.

The ceremony also presented awards to those employees who have been with the company for 40 years or more, with three of them either starting with the company before or on the day of the Lewiston facility’s opening. 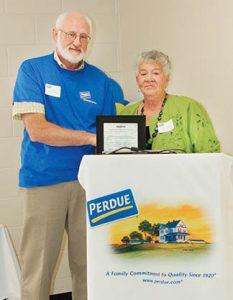 Since 1976, the Lewiston plant has expanded its facilities several times and grown to more than 2,000 associates working there today. It is supported by 275 contract farmers – 17 of which have been raising Perdue chickens for at least 40 years.

Perdue is Bertie County’s largest employer by far, and a major one to the Roanoke-Chowan area as a whole.

State Agriculture Commissioner Steve Troxler, who was not present at Friday’s event, nonetheless released a letter to the associates at Lewiston’s Perdue plant.

“Congratulations on 40 years of operation in Lewiston. Perdue and its producers are major contributors to our state’s poultry industry, which is a major part of North Carolina agriculture,” the letter began.

Troxler also noted later in his letter, “In addition to the economic benefits Perdue has brought our state, I also commend the company and its employees for their commitment to our communities. The associates in Lewiston care deeply about their community and have shown that thoughtfulness through their support for a variety of causes, including providing school supplies to the children in Bertie County.”

This year, the Perdue plant in Lewiston received the Joint Industry Safety and Health Council Award of Honor for maintaining its Occupational Safety and Health Administration (OSHA) safety metrics at least 25 percent better than the industry average for at least three years.

During Friday’s ceremony, Evans listed some of Perdue’s other notable accomplishments and rankings.

Evans added, “A big part of our vision is to be the most trusted company in food products.”

He also pointed out that the popular “Perfect Portions” chicken product – now a $100 million business – started at Lewiston’s Perdue plant.

Perdue’s first-ever wellness center, which provides healthcare to its employees, was also begun at the Lewiston facility.

Evans further noted, “And let’s definitely not forget that (the employees of) this plant raise so much for Relay for Life that it is top 10 in the country.”

Several local officials and other public figures were present at Friday’s celebration, including the mayor of Lewiston-Woodville, Dayle Vaughan.

“Thank you all, and we are so blessed to have (Perdue) here. You are a wonderful asset to Lewiston-Woodville and the Roanoke-Chowan area,” Vaughan stated.

Chairman of the Bertie County Commissioners, John Trent, noted, “Perdue has done so much for the community and its children. Whenever a disaster happens, Perdue is always the first to pick up the phone and ask what they can do to help.”

Trent added, “I live a couple of miles up the road from here (the Perdue Lewiston plant). Perdue has always called after anything that happened and asked if we were okay, even before I became an elected official.”

Reverend Gary Cordon, a former Bertie County Board of Education member, commended the Lewiston Perdue plant for its support of Bertie County schoolchildren.

Robert Rawls, 62, has been working for Perdue since before the Lewiston plant even opened. He originally started training in the Salisbury, Maryland plant to work in the shipping department. Today, Rawls works for the Lewiston operation in agribusiness. He’s also worked determining meat yield as well as in the Quality Assurance (QA) department.

“I really liked QA because I got to work with and around a lot of people, and it is a very important job because it involves food safety,” Rawls stated in a later exclusive interview with the Roanoke-Chowan News Herald.

He added, “I think Perdue has been very beneficial to the community and to my family. I met my wife not long after starting with Perdue, and she has been working with the company for 38 years herself. We were able to raise our kids, buy a house, and get the kids through college because of this company.”

The Lewiston operation of Perdue has over the years become an ever-more-sophisticated work environment, according to information released to the media.

Today, there are 10 associates who have been employed at the Lewiston plant for 40 years or more – with three of those who were employed by Perdue either before or on Lewiston’s opening day.

Seven of those 10 were present at Friday’s celebration and awarded with plaques for all and gift bags as well for the three receiving special recognition.

(Asterick denotes the employees who were given “Special Recognition” due to having started working for Perdue on or before the plant’s opening date in February of 1976.

JACKSON – Those working in law enforcement have always enjoyed a common bond of brotherhood. When one officer or department... read more