Wreck shuts down US 17

MIDWAY – An overturned tractor-trailer, fully loaded with LP gas,  shut down the northbound and southbound lanes of  US 17  in eastern Bertie County on Monday.

According to NC Highway Patrol Trooper A.S. Genao, the wreck also caused the evacuation of homes within a half-mile radius of the accident scene, approximately 1.2 miles north of the NC 45 intersection at Midway. 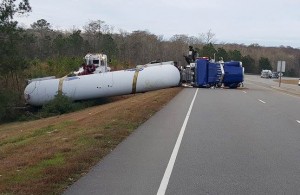 The tanker truck is shown here just prior to being up-righted onto its wheels. Photo courtesy of Jodey Sary

“That was done as a precautionary measure,” Genao told the Roanoke-Chowan News-Herald. “The tanker is loaded with propane gas, and even though the gas is not leaking, we didn’t want to take any chances, especially during the process of getting the rig upright and transferring that gas to another tanker.”

Genao said he expects the road to remain closed until mid-afternoon.

Northbound traffic was re-routed onto NC 45 at Midway to Jeff White Road and back onto US 17 at Blackrock. Southbound traffic is using the same detour, only in reverse order.

Trooper Genao said the driver of the rig, James Carter of Middlesex, NC, was northbound on US 17 (near the Salmon Creek area) shortly past 5 a.m. when the front right tires of the vehicle ran off the road to the right.

“The shoulder area of the road was still soft due to the recent wet weather and when Mr. Carter attempted to steer his truck back onto the roadway, he overcorrected, causing him to lose control and the truck overturned on its right side,” Genao said.

Carter wasn’t injured. He was cited by Genao for failing to maintain lane control.

In addition to the Highway Patrol and Bertie Sheriff’s Office, others responding to the accident scene included members of the Merry Hill-Midway Fire Department, Perrytown Fire Department, Bertie County Emergency Management, and a DOT Hazmat team.

The truck is owned by Stallings Brothers of Middlesex.