AHOSKIE – For Ian New, the honors keep rolling in.

The 6’2”, 230 pound Hertford County High School senior interior lineman has become the school’s first-ever player to make the roster of the Blue-Grey All American Bowl to be played Jan. 16 at EverBank Field, the NFL Jaguars’ Stadium in Jacksonville, FL.

Last spring New participated in the Blue-Grey All-American North Carolina Combine in Greensboro where his performance before coaches and scouts garnered the Murfreesboro native an invite to one of the four remaining regional combines including the one at the Bon Secours Washington Redskins Training Center in Richmond, VA last May 30-31. 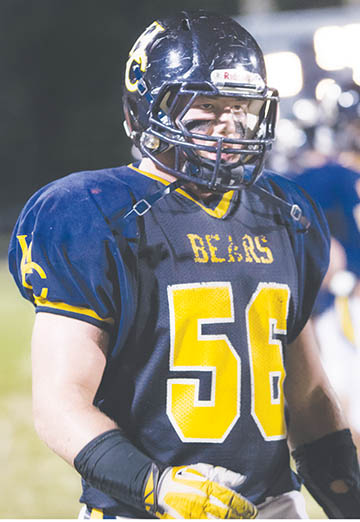 New was one of over 70 invitees to the Mid-Atlantic Regional Combine; the third combine he has participated in, including the Shrine Bowl Combine in Alamance County.

“In Greensboro I got tested on my 40 (yard dash) time, my shuttle time (testing lateral quickness), 185 reps (weight lifting), one-on-ones, two-on-two, and things like that to test our skills,” he said last May between summer workouts at the high school.

Last month New received a packet in the mail. It was the announcement that he had been chosen for the all-star game.

“I was chosen over 7,000 other people that had come to the Combine,” New said. “I was glad I finally got to go because this is a chance of a lifetime.

With his size, New could hardly fly under the radar for his final season of high school football. Just ask the ball-carriers in the Northeastern Coastal Conference.

New was part of a Bears defense that carried the team through a six-game win streak that kept Hertford County at the top of the regular-season conference race which was finally decided in the final two games of the year when Elizabeth City Northeastern edged them out.

During the regular season New had 58 tackles, 32 of them solo, and five for a loss, along with two solo sacks, four forced fumbles and five fumble recoveries. In three games this season he led the team in tackles with seven (Bertie, Currituck, and the first Northeastern game).

“My only disappointment was my sacks total,” he noted. “They would see me coming (on a pass rush) and bail – go to the other side – or the running back would pick me up (to block). Either way, they game-plan on me so they always knew I was coming every time.”

Founded in 1989 by a father who didn’t think his son was receiving the proper exposure from college coaches, the All-American Bowl now helps prep prospects from all over the country receive national exposure and increase their chances to secure scholarships to a college, whether that be at the NCAA Division I level, or II, III, NAIA or even Junior College.

“It’s not the Army All-America Bowl,” said HCHS head football coach Terrance Saxby, “but its close. Besides, Ian’s an All-American kid by the way he works out; and he’s just a great all-around person.”

To help offset the cost of New’s Jacksonville trip, some of the Bears boosters have organized a fund-raiser. They will be selling plate dinners at the old Ahoskie Wal-Mart parking lot on Dec. 1 from 11a.m.-to-2 p.m.

“I hope they’ll help support me,” New said. “I’m proud to be going and to represent Hertford County High School”

During the off-season New trained with former Hertford County High grad, Russ Sohooli, a Certified Exercise Physiologist from ECU who helped him work on his speed and agility.

New has also received notice for work in the classroom. His academic performance has drawn the attention of Ivy League schools, even though they don’t offer athletic scholarships.

Currently, New hasn’t received any athletic scholarship offers, but he has been accepted at Western Carolina for academics. He’d like to attend a school and major in athletic training or engineering.

Part of New’s work ethic comes from his home environment. He credits his dad, John, who played for the late Diego Hasty at Northampton-East High back in the 90’s, as one of his primary influences.

“He always told me to go 100 percent in everything I’m doing,” New says with pride.

His family also instilled a strong work ethic. New has a part-time job at John’s Seafood in Murfreesboro.

“My NFL heroes are J.J. Watt (Houston Texans) and Luke Kuechly (Carolina Panthers),” he confesses, “because they go all-out.”

New began playing football with the Rich Square Panthers in the Creecy Midget League, winning a championship when he was in fifth grade; then came school ball, first at Hertford County Middle School before he appeared on the scene at the high school.

One of the Bears’ captains, his coach really appreciates his leadership.

“He’s almost too perfect,” said Saxby with a wry smile. “You have to almost find reasons to yell at him because he pretty much does everything. He’s the glue to this thing,”

“You’ve got to bring the aggression when you play football; you can’t play this game the right way unless you’re mean,” New admits. “I tried to bring some ‘mean’ this year when I played; going 110 percent on every play. Even when I felt like giving out or giving up I kept going because my goal was to help us win a state championship.”