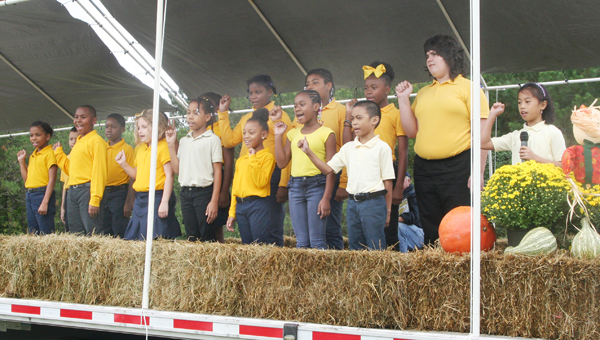 Despite very little cooperation from Mother Nature, the second annual Aulander Peanut Festival held here on Saturday drew better than modest crowds, and while it didn’t have organizers dancing on nut shells, at least they weren’t shaking like those famous peas. 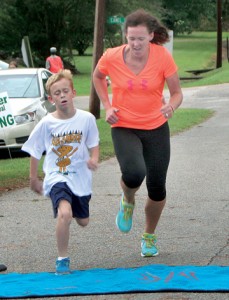 Mindy Drew (right) calls out encouragement to young Fin Terry from Kelford (left) as he crosses the finish line to win the Fun Run at the Aulander Peanut Festival on Saturday. The rains did not dampen the activity for the adult runners 5K, or the kids who ran a shorter route. Staff Photo by Gene Motley

From the opening salvo that began the morning’s 5K Fun Run to the performance of the bands Saturday night that closed out the Festival, no one who attended wasn’t charmed.

“It’s not as pretty a day as we’d like to have, but we’re here and we’re having a good time,” said Mayor Larry Drew, working on last minute preparations as the final concessionaires set up their booths and shelters. “We moved our date hoping we would have a prettier day and a warmer day, but people will always come out if they have something to come to.”

The inaugural festival was held last October also at the area of the old high school and the ball “Field of Dreams” off Rice Ave.

“Maybe we should have stayed where we were,” Drew shrugged with a smile.

Many festival activities returned for a second go-round: the cooking contest, open to all amateur cooks, ages 5-and-up; with categories that included appetizers, main dishes, side dishes and desserts, and prizes awarded in each category.  Also featured was the popular Peanut Festival Car Show, sponsored by the Tri-County Cruisers, with all makes and models of cars, trucks and cycles.

“We’re excited about it,” said Festival Committee member and Aulander Town Councilwoman Bobbi Parker. “We’re going to be here despite the weather, and we’re not going to let the weather destroy the day.”

There was a crowd of some 75 on hand for the opening ceremonies. After prayer and the National Anthem, children from the Aulander Elementary School, brought the crowd to its feet with two original tunes they called “The Peanut Song”, celebrating the tasty legumes. 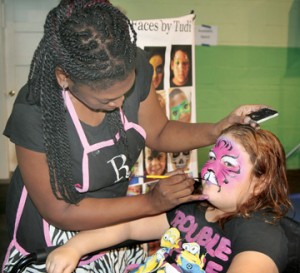 Trudi Vaughan of ‘Faces by Trudi’ paints a feline motif on the face of Brooke Taylor. Several dozen children – and adults – had their faces painted as part of the day’s fun. Staff Photo by Gene Motley

Golden Peanut Company, now known as Golden Peanut and Tree Nuts, are one of the title sponsors, but they always like to remind patrons that they’re just one of many making a contribution.

“Actually, it’s the Town of Aulander who puts this on,” said Golden Peanut Office Manager Claire Morris, who’s worked for the company for 20 years. “They do it to recognize us as a business in the community, to benefit the community, and to stress community involvement.  It’s just a day to come together, be together, and have some fun.”

And the fun was there…rain or shine! 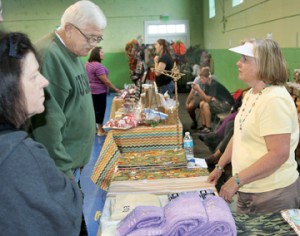 Festival-goers were treated to several dozen vendors who set up booths inside the old school gym. Many of the merchants had local wares for sale and display. Staff Photo by Gene Motley