ASKEWVILLE – Under cloudless skies on a balmy morning the town of Askewville kicked off “Askewville Days” with the ribbon-cutting dedication of the new Town Hall and Museum.

The building, at 104 Askewville Street, was the former site of the Southern Bank & Trust branch located in the town.

With Bertie County Board of Commissioners vice-chair Tammy Lee heading the dignitaries on hand for the event, the small crowd cheered as the bright blue ribbon was snapped. 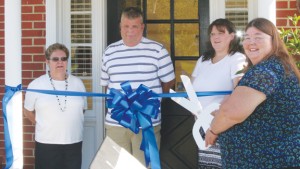 Askewville Mayor Gloria Bryant (right) prepares to cut the ribbon for the grand opening of the new Town Hall & Museum in a Saturday morning ceremony. The building is the location of the former Southern Bank on Askewville Street. Also on hand for the ribbon-cutting were Town Commissioners (from left) Kay Brantley, Mike Baker, and Carla Pesce. Staff Photo by Gene Motley

In addition to serving as the town’s official setting, photographs and other memorabilia will be also be on display for residents and visitors alike.  Following the dedication, those who toured the building saw artifacts and newspaper clippings that are a part of the town’s illustrious history.

For years, the old Town Hall was located in an office in the fire department.  In researching some of the town’s history, the town’s unofficial historian, Martha Lou White, along with the mayor and the town’s commissioners found that the fire department had leased that office space to the town dating back over 100 years.

“In January 2014 when we received the sad news that our small town bank was closing we contacted everyone we could at Southern Bank to try and convince them we needed our bank and to keep it open,” said Mayor Gloria Bryant.  “Unfortunately, I couldn’t convince the ‘higher-ups’.”

After Bryant’s appeal to SBT’s regional senior vice president Jerry Alexander failed to prevent the closure, she went about trying to see if the town could purchase the old bank building.

“He (Alexander) wasn’t sure what they were going to do with it at the time, so I told him the town could use it if they would let us have it at a very cheap price,” Bryant said.

Bryant’s and the town’s charm must have worked, because SBT deeded the building to the town for the cheapest possible price: free.

“Once we received the building we knew it was too big for just a town hall, so we decided that we wanted to create a museum for our town,” Bryant continued. “I started asking around town and thanks to Martha Lou White we were able to receive many items donated to the town.”

“What we have on display today we hope is just a beginning,” she noted. “We hope to add more as donations come in; and in the future we also want to add a lending library.”

Bryant said the town pledged to use to building to not only showcase their town, but also to conduct the town’s business.

“We don’t take lightly the faith you’ve entrusted in us,” she told those assembled. “We know Askewville is not perfect, but it’s perfect for us.”