ASKEWVILLE – “Life in the Fast Lane” is a song by rock-and-roll legends The Eagles, released in 1976.

From bright lights of Nashville, Tennessee to dimly lit honky tonks that dot the rural landscape of eastern ‘Carolina and southside Virginia, R.T. Johnson, an Askewville native, and his band mates are fast – there’s that word again – making a name for themselves.

To solidify that fact, look no further than the upcoming release of the group’s EP (Extended Play) recording – “Man I Made.” They will formally release that five-song production on Saturday, Aug. 24 at Drifters Lounge, located inside The Ahoskie Inn. A single off that EP – “Thirsty Weather” – is scheduled to hit the radio airwaves two days later. 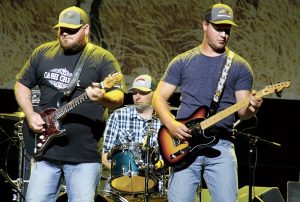 Askewville native R.T. Johnson (left) is joined on stage by Jeremy Lowery (center) and Andrew Hauser on Aug. 9 at the Roanoke Rapids Theatre when they opened for the legendary Marshall Tucker Band. Staff Photo by Cal Bryant

“Three of the songs are ones I participated in writing,” said Johnson, just moments before taking the stage on Aug. 9 at the Roanoke Rapids Theatre where he and his group opened for the legendary Marshall Tucker Band. “The other two (songs) were pitched to us while out in Nashville.”

“That all came about after opening for John Michael Montgomery (a Kentucky-born Country Music artist),” Johnson shared. “Their sound engineer liked what he heard. He put me in touch with the CCB folks and we’re off and running.

“I’ve been around long enough in this business to hear a lot of promises about this and that, but it doesn’t materialize until you have the right people behind you. That seems to be happening now, and if we do take off it will all be worth the wait,” Johnson added.

In the meantime there’s no rest for R.T. and his musical comrades.

Fresh off their rousing performance on Aug. 9, they had three gigs this week on consecutive nights: Thursday at the “We Be Jammin” summer series in Franklin, VA; Friday at the Doghouse Tavern in Ayden; and an 8 p.m. event tonight (Saturday) at the Roanoke Golf & Country Club in Williamston.

Beyond that, the group – which also features Shawn Mitchell (bass guitar / vocals), Jeremy Lowery (drums / vocals), Andrew Hauser (guitar / vocals), and Doug Askew (utility man) – has nearly 30 performances on the books until the end of December.

Even though they didn’t come together until January of this year, the band members jelled instantly.

“The puzzle pieces may look different, but they are all coming together,” said Lowery, who, along with Mitchell, hails from Pamlico County (Hauser lives in Franklin, VA). “There’s something special about this particular group. There’s great chemistry among us.”

Lowery credited the latter sentiment to the stage experience of Johnson and Mitchell. 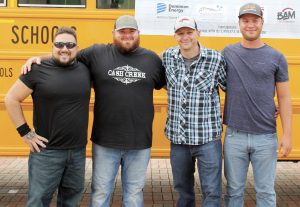 The “boys in the band” are, from left, Shawn Mitchell, R.T. Johnson, Jeremy Lowery, and Andrew Hauser. Not shown is the group’s utility man, Doug Askew. Staff Photo by Cal Bryant

“I think we’re all good at different things, but I really admire what R.T. and Shawn bring to the table with their years of professional experience,” he stressed. “We’re clicking together thanks to proper song selection and picking the right tune, the right key for those songs. Plus I think we all harmonize well together.”

Johnson’s passion for music started early in life. He was performing by the age of 10, and developing his guitar skills as well. He joined his first band – Back Draft – in 2003. That group evolved into Moonshine seven years later.

“It was all about just playing music,” he said. “I never thought about where this all would eventually lead me. Now that it has grown to the point of what’s happening today, it’s still all about the music. Maybe now I’m just dreaming bigger.”

When asked about who inspired him musically, Johnson was quick to provide an answer.

“My granddaddy, my whole family on my mama’s side, were musicians. I got my start, I got my love of music, from them,” he stressed.

“Other than my passion for music, the only reason I’m still doing it is because of my daddy (Roy Johnson),” he continued. “A lot of folks don’t understand what goes on behind the scenes and being in a band. It’s not just showing up, playing two or three hours and then going home, and then working a full-time job to boot. My daddy was the one who taught me never to stop enjoying what I was doing. He kept pushing me.”

On weekdays, Johnson is employed as a Crop Insurance Agent with the Phil Coggins Agency in Ahoskie. Prior to that he farmed with his father until they sold out in 2015.

“I guess you might say that farming never got out of my blood; I remain in agriculture with the job I have today selling crop insurance,” Johnson smiled.

On nights and weekends, Johnson is typically on a stage chasing his dream. And he’s quick to admit that his loyal fans are what drives him.

“Whether you’re playing in front of two people or two thousand, it doesn’t change what you play or how you play it,” he noted. “I feed off the crowd and the way they react to what you’re doing. And there’s no better feeling in the world when you play a song you wrote and the crowd sings it along with you.”

The fast lane so far has led Johnson to open for other well-known performers such as David Allen Coe, Trick Pony, Aaron Tippin, Jawga Boys, Parmalee, and Confederate Railroad. When he received the invitation to open for the Marshall Tucker Band, Johnson said he had to, “slap myself to see if I was awake.”

“I grew up playing all their songs and now I shared the same stage with them, how cool is that,” he remarked. “Their style of music helped lead me to the style I perform today.”

That style – and a growing fan base – has led to a life in the fast lane….and that’s alright with R.T. Johnson.