MERRY HILL – A mile of asphalt will take you a mighty long way; and they only need a few more feet to get there.

The mile, or roughly 5,000 feet, is the length the Tri-County Airport Authority are hoping to extend the runway of the facility, located off NC 561 and positioned to provide air service to Bertie, Hertford, and Northampton counties. 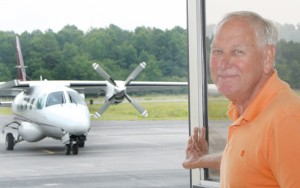 Longtime Tri-County Airport Manager Henry Joyner is shown at the airport terminal. In the background is a Mitsubishi MU-2 Peacock turboprop that had flown in passengers to this area for conducting local business. Staff Photo by Gene Motley

Monday night, TCA airport manager Henry Joyner along with Airport Authority Board chairman and Powellsville mayor Thomas Asbell appeared before the Bertie County Board of Commissioners at their August meeting held at the Midway Community Building in Merry Hill.  In addition to an update report to the group, Joyner and Asbell also want to make those Commissioners aware of upgrades the facility has planned.

The airport celebrates its 50th year of existence in 2015 and was built to service not only local pilots and their aircraft, but also to aid with transportation for many of the businesses and industries in the area in the 1960’s.

Joyner, who retired from the military in 1971, gave flight lessons there in the early 70’s; and following the death of the then airport manager, assumed the reins of day-to-day management of the facility in 1976 and three years later the current terminal building was built.

“We were the first airport in this area within about a 100 mile range to offer jet fuel,” Joyner recalled. “Some of these big companies were dropping people off almost every day.”

Business at the airport served several local industries at the time: Blue Bell Jeans, CF Industries, Blue Ridge Shoes, Talon Zipper, and Georgia-Pacific, among them.  But from the hey-days of the late 70’s-early 80’s, inflation and recession began to take its toll. A decline in local industry began in the mid-80’s with closings and relocations.

An injection came in ’86 when chicken magnate Frank Perdue wanted to locate to the area; and in addition to multiple flights in and out since then, his businesses use the airport quite frequently.

“All along your county has been good about contributing to us, and for that we are grateful,” Joyner stated.

He went on to say the fuel system, installed 36 years ago, is now in shambles; though the Authority anticipates new system installation this fall (2015) to service both jet fuel and aviation gas, to which Bertie County contributed $5,000.

“We’ve lost a lot of our jet traffic, but hopefully it’s going to be coming back to us,” he asserted. “Just last week Golden Peanut flew in, UNC-Chapel Hill came in, and Perdue came in. That’s three corporate companies coming into Tri-County Airport.”

Joyner went on to name several other corporations that have done, and continue to do, business through use of the airport; as well as state agencies.

“There are also North Carolina Wildlife and the North Carolina Forestry Service, who actually maintain a tank on the field itself in case they have to fly out to a fire,” he said.  “Then there’s the military: the Army and the Coast Guard, who also bring their helicopters for night-flight training.”

Commission vice-chair Tammy Lee, who serves on the Authority, asked Joyner to discuss upcoming projects and the manager talked about the rehabilitation of the terminal building.

“You’ve got to realize the building was built in 1979,” Joyner replied. “We’re trying to repair the roof, put in new flooring, update the bathrooms, and some of the other work that needs to be done.

“You may ask what you get for your $18,000.  We like to say it turns (dollars) over whether it’s a rental car or a Nab and a Coke, and that gives us a decent amount of impact,” he answered.

Chairman Ron Wesson inquired as to a percentage of how much of the subsidy that all three counties contribute goes to the airport’s operation; while Commissioner Stewart White wanted a raw figure of the airport’s annual operating cost.

Joyner said a percentage of the sale of aviation fuel goes into a trust fund that allocates $150,000 annually to every airport in the USA.

When asked about other funding sources, Joyner said Authority members were looking into rural development funds and other grants; and he revealed a recent contribution from the Golden Leaf Foundation.

“The future of growing the airport is focusing on those other sources of revenue beyond what the local communities contribute,” Wesson said. “We’ve done our share and will continue to do our share, but there are some other funds out there and we need to look at them all.”

Airport Authority Board chairman Asbell said the airport needs to get to the 5,000 foot runway length in order to service jets.

“We send them to Edenton, Suffolk, Roanoke Rapids, and Rocky Mount,” Asbell said. “That’s enterprise that we could have here. We have to take what we have here: good restaurants, bed-and-breakfasts, rentals and get them all involved.  People need to know what we have and the value of these assets.”

Commissioner John Trent offered a personal hand in assisting the Authority in the rehabilitation as far as crunching numbers with their building project.

Wesson offered that the Authority also submit a plan to the local legislators who represent the three counties.

“They can help us, but we won’t get there without some substantive, structured plan,” the chairman said. “There is local foundation money that we can go to businesses and ask them to get their foundations to contribute.”

“We are on the move,” said Asbell. “We have to have the public involved.”