MERRY HILL – Tuesday, Aug. 18 marks the 425th anniversary of English colonist John White’s return to coastal North Carolina where what he did not find became etched indelibly in history.

Now, some things from White’s time that have been found are getting a chance in the national spotlight. 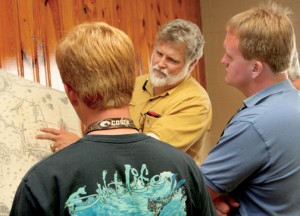 While Jordan Rose (left) of Windsor and Jody Sary (right) of Merry Hill look on, Brent Lane (background) of the First Colony Foundation points to a section of an old map that leads today’s historians and archeologists to think that a portion of the famed Lost Colony may have relocated to the Merry Hill area of Bertie County. File Photo by Gene Motley

Pottery, a handmade nail, and an aglet (or sheath) from sixteenth-century clothing were presented this past Tuesday as evidence at the University of North Carolina in Chapel Hill’s Wilson Library by First Colony Foundation as proof of the presence of early English settlers, not on the coast, but possibly as far west as Bertie County.

The artifacts were discovered some 60 miles away from Roanoke Island, where the first English settlers landed in 1587. Their leader, White, left the island for supplies, and when he returned in 1590, delayed three years due to England’s naval war with Spain, he found only the word “Croatoan” carved in a fence post, and the letters “CRO” left on a tree.

Now with the help of new information from a map drawn by White, an area called simply “Site X” – thought to be the confluence of the Albemarle Sound and the Chowan River – has been excavated. That area is near what is now Salmon Creek in Bertie County, east of Merry Hill.  Much of it is now taken up by Scotch Hall Preserve, a golf course and residential community just across the Albemarle Sound from Edenton.  That’s where these 21st century explorers are reporting an archeological find, and with the landowner’s cooperation, archaeologists have begun sifting the soil again.

Much of what was shown this week in Chapel Hill had been displayed before during a presentation in Bertie County.

In May of this year, Brent Lane, an entrepreneur at UNC-CH, and one of the researchers out to find additional information about the possibility of the Lost Colony’s relocation to Bertie County, along with a group of his fellow archeologists, first spoke about the findings before a group gathered at the Windsor Community Building.

“What we have is a chance to talk with the folks in the Bertie County community about something that’s an important part of their own heritage that’s been recently been discovered by archeologists and historians,” Lane said at the time. “What’s been discovered is that some part of the Lost Colony, when they left Roanoke Island (in Dare County), came to Bertie County.  We don’t yet know how many, and we don’t know for how long, but the evidence we have now is that a small group of “lost colonists” who, when they stated their purpose was to move from Roanoke Island 50 miles into the mainland, some of them came to Bertie County.”

Tuesday in Chapel Hill, the group revealed they have found a kind of sixteenth-century pottery known as Border ware, which was probably made in northern England and was used to store fish for sea voyages. They also uncovered other colonial-era artifacts, including a food-storage jar, a hook for stretching fabric or hides, and pieces of early gun flintlocks.

The First Colony team thinks the colonists left their Outer Banks settlement in two waves: first a small group of men, followed by a larger group of men, women, and children. 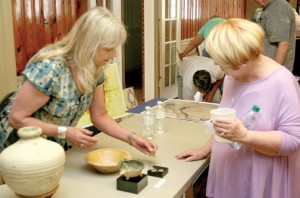 Archeologist Bly Straube (left) displays some of the pottery artifacts from the excavation at the probable Roanoke Colony’s Bertie County site near Salmon Creek. File Photo by Gene Motley

“There’s a lot more unknown to be discovered,” said Foundation president Phil Evans.  “The future before us is one of still searching, still researching.”

When he spoke before the Windsor gathering in May, Lane offered several scenarios historians believe happened to ‘The Lost Colony’.

“There are four main theories of what happened to the settlers,” Lane explained. “One, that they met their deaths by disease, starvation, or attacks from either the Indians or the Spaniards who had come up from Florida to wipe out the English colonists; and a second option is that the group, in some part, relocated north to the harbors of Chesapeake Bay Virginia where they thought that was a better place for their ships than the Outer Banks.”

Lane said the third theory was that part of the settlers merged with the Native American tribes who inhabited the northeastern region of North Carolina before the Indians’ migration south to what is now Robeson County.

And the fourth theory, which marked a great portion of his lecture, was a re-settlement on the Albemarle Sound in modern-day Bertie County.

A detailed map, known as the “Virginia Pars” map of eastern North Carolina and southeastern Virginia drawn by John White, had actually been preserved in the British Museum in London since 1866.  In 2011, Lane noticed two paper “patches” where it appears the map had been corrected and made of paper contemporaneous with that of the map. Lane’s inquiry sparked a research investigation of not one, but two apparent patches on one map.  Researchers at the museum paid particular attention to the surface of the patch in Bertie County, and used modern scanning technology to look beneath the patch in 2012.

There, researchers found a bright red and blue symbol of what appears to be a fort underneath the patch; and on the map’s surface they found a separate fort symbol in scratch marks, which are thought to be from the quill of a pen writing in invisible ink.

Sources made available after the colonists disappeared from Roanoke reference plans to resettle the mainland, and the fort in Bertie County is now suspected to be the realization of those plans.

Archaeologist Nick Luccketti, who also appeared with the group during the Windsor presentation, said in Chapel Hill that the explorers knew that a number of sites of archaeological interest had been investigated in Bertie County decades ago. First Colony had been comparing pottery shards found there with those from known English sites of the same era.