WASHINGTON, DC – According to the most recent data, the number of practicing attorneys in the United States exceeds 1,270,000.

Of those, a shade over 17 percent have been admitted to the Supreme Court Bar. Tonja Monique Gaskins is among those to gain such distinct designation. 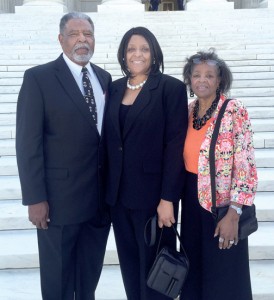 Tonja Monique Gaskins stands between her parents, Kirby and Maggie Gaskins of Merry Hill, on the steps of the United States Supreme Court in Washington, DC. She was recently approved as a practicing member of the Supreme Court Bar. Contributed Photo

Gaskins, a 1984 graduate of Bertie High School, was admitted June 22 to the Bar of the Supreme Court of the United States in Washington, D.C. With her parents, Kirby L. and Maggie W. Gaskins of Merry Hill, looking on, Tonja Gaskins stood before Supreme Court Chief Justice John Roberts as her qualifications and motion for admission were read by Paul E. Fahrenkopf.

Chief Justice Roberts – joined by Associate Justices Antonin Scalia, Anthony Kennedy, Clarence Thomas, Ruth Bader Ginsburg, Stephen Breyer, Samuel Alito, Jr., Sonia Sotomayor, and Elena Kagan – granted the motion. Under oath, Gaskins swore that, as an attorney and a counselor of the Court, she would conduct herself uprightly and according to the law and that she would support the Constitution of the United States.

By the time she lowered her hand from accepting the oath, Gaskins became one of the few attorneys across the nation allowed to practice/argue a case before the nation’s highest court.

“It is both a blessing and an honor to have been admitted to the Bar of the highest court in the United States,” Gaskins said. “For this and all the other achievements in my life, I give God all the glory for the things that He has done. Since wisdom comes from the Creator, all of my help comes from the Lord.”

Gaskins said she is very thankful for the prayers and support of her parents. She also expressed gratitude to her extended family, friends, and former educators.

Gaskins was admitted to the Bar of the State of Maryland and to the Bar of the United States District Court for the District of Maryland in 1997.  That same year, she was selected and served as a judicial law clerk for the Honorable Arrie W. Davis at the Court of Special Appeals of Maryland in Baltimore.  In 1998, Gaskins began her career in public service as a trademark attorney at the United States Patent and Trademark Office where she is as a senior staff attorney in the Office of Trademark Quality Review and Training.

However, despite her numerous professional accomplishments and making her home in Maryland since 1988, she boasts of being, “a proud native of Bertie County.”

Gaskins is the granddaughter of the late Ned and Loukirby S. Gaskins of Merry Hill, and the late Trannie and Martha C. Watford of Colerain. Her brother, Kirby Kenyon Gaskins, resides in Winterville with his wife Latonya and their son Xavier. She is also the pride of her godparents, Luther and Nellie W. Taylor of Colerain.

Candidates for admission to the Supreme Court Bar must have been admitted to practice in the highest court of a State, Commonwealth, Territory, Possession or the District of Columbia for at least three years prior to applying and must not have been the subject of any adverse disciplinary action pronounced or in effect during that three-year period.