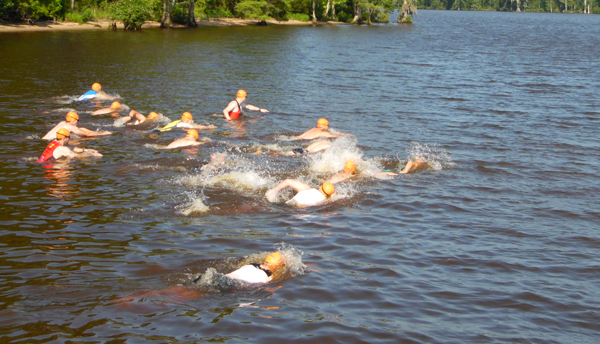 More than 100 athletes participated in the first-ever “Pound the Sound” triathlon at Scotch Hall Preserve in Merry Hill. Here the men’s group begins the competition of swim, bike, and run with a half-mile swim around Salmon Creek. Photo by JW “Russ” Russell

MERRY HILL – They’re not your everyday athlete, because this competition takes a little bit more.

Spectators cheered as 66 swimmers raced in the brackish waters of Merry Hill’s Salmon Creek here Saturday in Bertie County’s first-ever triathlon.  “Pound the Sound,” was held mainly on the grounds of nearby Scotch Hall Preserve. 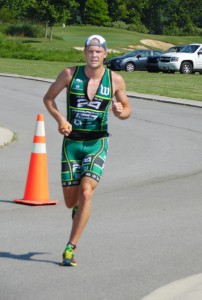 Its full title is “Pound the Sound, Keep the Secret”.

“That’s because not many people know about this beautiful place as they pass by probably a million times a year,” said John Davis, one of the event’s organizers. “Many folks are not aware of the quality of life that is here. Bertie County is home to three rivers and one sound. We sit on the edge of the Albemarle Sound, one of the largest fresh bodies of water in America.”

Davis went on to rave about his home county, and why this event was so perfect.

“On one side of our county is the Chowan River and on the other side is the Roanoke River; in the middle of the county is the Cashie River which is a kayaker’s paradise. In short, we are open fields, pine forests, history, and panoramic views. The only downside is we are like much of rural America; beautiful, overlooked, and economically depressed. “Pound the Sound” is our way of sharing the secret that we have a lot to offer.

Proceeds from the event will support the Bertie YMCA and civic programs of the Windsor Rotary Club; with a portion being used to promote the 2016 event.

Four waves of competitors swam roughly 750 meters (.49 mile) around a triangle course of large orange and yellow balloon buoys before exiting the water at the shoreline.

From that spot the athletes transitioned up a small hill to waiting bicycles and the start of a 14-mile ride.  The paved course meandered throughout the Arnold Palmer-designed golf course layout.  A portion of the race course exited the golf community onto Sutton Road where runners passed fields of corn, sage, and other Bertie crops. 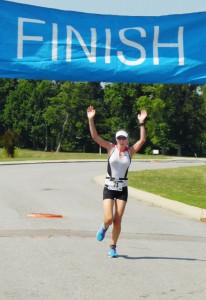 The final leg was a grinding five kilometer foot race to the finish line, which was a spectacular view of the beautiful Albemarle Sound.

Temperatures for the event were in the mid-90’s, with a heat index into triple figures.

“The heat got to me,” the exhausted winner remarked.

Jennings says he competes in about eight triathlons annually.  Two weeks ago, he participated in the Breezy Point Triathlon held in Norfolk.

“This was a perfect course and I had a great swim,” he added.

Jenny Wilson of Winterville was the first female to cross the finish line.  Her time was one hour-27 minutes-and-42 seconds.

Race director Dutch Remkes, who officially started each group of swimmers, was also on hand at the finish line greeting the athletes.

“Did you see the crowds,” Remkes enthused.

Many spectators witnessed Bertie’s first triathlon, cheering at each phase of the endeavor.

Windsor Police Chief Todd Lane, who headed up the volunteers for the event, applauded the efforts of the nearly 80 volunteers from Bertie High School students to County Commissioners (Ron Wesson, Tammy Lee, and John Trent) and all sorts of others who worked with the committee.

“You just wouldn’t believe the number of hours volunteers have donated with their time and energy for this great event,” Lane remarked.  “For months they participated in meetings, research, and organization. This venue is just a perfect location.  The folks at Scotch Hall have been spectacular.” 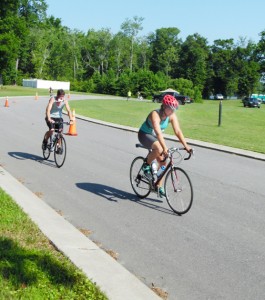 Crystal Godwin, branch manager of Southern Bank in Windsor, emceed the awards presentation and closing ceremonies.   Winners received commemorative medals and specially-designed pilsner glasses were given to the athletes.

“All of the competitors that I spoke to had a wonderful time and would consider coming back next year,” said Windsor-Bertie Chamber of Commerce Director Lewis Hoggard.  “The idea was to introduce the natural beauty of Bertie County to a lot of new people. There is a lot of beautiful natural areas in Bertie County but the most beautiful part of Bertie is its people who came together to put on quite a show on Saturday; I have to consider that is mission accomplished.”

Davis, who also serves as president of the Windsor Rotary Club, was extremely satisfied with the inaugural triathlon.

“Our goal was to partner with other organizations and to promote Bertie County, and I think we did that,” he said.

Bertie YMCA director Heidi Bonislawski said the idea of having a triathlon in Bertie County was “definitely John’s brainstorm.”

From sponsors, to volunteers, to organizers, all agreed that community support and all parts working together is what made the first ever “Pound the Sound” triathlon a first-year success.