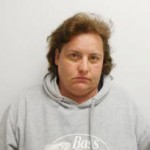 Joy White Davenport, 45, of 349 Millennium Road, Aulander, was served 82 felony warrants on Monday in the Hertford County Jail. The latest charges – 41 counts of identity theft, 40 counts of obtaining property by false pretense, and one count accessing computer theft – stems from her latest alleged scheme to bilk money from an unsuspecting victim.

The most recent set of charges come on the heels of her arrest on March 31 in another crime involving a different victim. In that case, Davenport faces 25 felony counts each of identity theft and obtaining property by false pretense, and one felony count each of unlawfully obtaining a credit card and financial card fraud. She was jailed under a $250,000 secured bond on those charges.

According to Hertford County Sheriff Juan Vaughan, the new charges stem from an investigation conducted by HCSO Sgt. John Joyner, one that began Feb. 18.

Joyner’s investigation produced a link between Davenport and the victim.

“Mrs. Davenport worked as a babysitter for the victim in 2012 and 2013,” Vaughan stated. “We believe it was during that time that Mrs. Davenport came into the possession of some of the victim’s key personal information, to include a Social Security number and date of birth.”

Using that information, Vaughan alleges that Davenport went online to the North Carolina Department of Employment Security and filed an unemployment claim in the victim’s name. That application was eventually approved, leading Davenport to collect $282 per week from Oct. 3, 2012 – June 30, 2013.

“Sgt. Joyner’s investigation discovered that those payments were paid through direct deposit into a bank checking account shared by Mrs. Davenport and her husband,” Vaughan said. “However, when setting up the unemployment claim online, Mrs. Davenport used her home address on Millennium Road and listed the number to her cell phone.”

Davenport has been in the Hertford County Jail since March 31 due to her arrest in an Ahoskie case. There, evidence was collected in her home, through a search warrant, linking her to a case where she allegedly stole personal information from a victim to establish a credit card account.

Ahoskie Police Detective Justin Farmer handled the investigation on that case. Based on the credit card’s activity, Farmer went to local businesses to view video footage of purchases made by Davenport.

According to the North Carolina Department of Public Safety, Davenport has previous arrests for financial fraud.

In June of 1993 she was given a suspended sentence and placed on probation for misdemeanor financial card fraud in Hertford County.

She served 60 months of probation on a suspended sentence and was ordered to perform community service on an August, 2009 felony charge of larceny by employee in Northampton County.

In January of 2012 she was arrested in Pitt County for misdemeanor larceny by employee. Again she was given a suspended sentence and placed on probation as well as performing community service.