AULANDER – He could go on for hours and there wouldn’t be one wasted or boring moment.

Whether it’s telling stories of the Old South, reading his poetry with a Carolina drawl, or strumming away on his Martin Backpacker Guitar, North Carolina’s Poet Laureate Shelby Stephenson is a literary jewel. 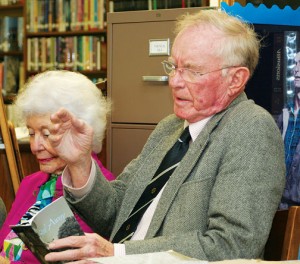 North Carolina Poet Laureate Shelby Stephenson reads from one of the more than one dozen books of poetry he’s published. He still lives in the Benson home he was raised in over 70 years ago. Staff Photo by Gene Motley

Tuesday morning, Stephenson regaled a small but enthusiastic crowd at the Sallie Harrell Jenkins Library here beginning with his historic recollections and references of life in his native Johnston County.  That then led to a poetry-reading sampler from the more than a dozen books he has authored before he ended the soiree picking out tunes on his miniature guitar of songs from traditional gospel to Hank Williams, Sr.

And as with nearly everything Stephenson does; he takes his time.

A man true to his Southern roots, Stephenson grew up on a family farm near Benson, attended UNC-Chapel Hill and later the Universities of Pittsburgh and Wisconsin.  From the richness of his voice when he reads his poetry one can also detect his time as a Smithfield radio station disc jockey back in his college undergraduate days.

Following graduation, Stephenson spurned law school, but continued a career in academia as a professor at both Campbell University (nee College) and UNC-Pembroke, from which he retired in 2010.

Along the way Stephenson published his first book of poetry in 1972 and his library of work has now reached 15 titles, as well as an anthology of North Carolina poets. This past year he was inducted into the North Carolina Literary Hall-of-Fame.

In December, Governor Pat McCrory appointed Stephenson as the state’s Poet Laureate; traditionally a lifetime appointment, but later changed to a two-year term.

“He has the title – as does Hank Williams – of being the ‘Hillbilly Shakespeare’, or being the North Carolina Dylan Thomas,” said Jenkins Library branch manager Sarah Davis by way of introduction. “We are a very fertile ground for writers.”

Stephenson is said to have such a marvelous gift for language so connected to the landscape of his birth, and he so eloquently writes of it, that there are few comparisons to his work.  His story-telling isn’t a rambling style, it just sort of meanders along until it reaches whatever point he’s trying to make.

“He writes about things people want to read about because they are really ordinary, earthy topics that speak to, for, about, and from the land,” said Davis. “His poetry is more of a story and his writing about the writing is better than the writing itself.”

Stephenson told a brief joke of how he dropped the telephone and nearly fell out of bed when he received the early morning call from the governor about his appointment.  Later he read an Easter poem by Pulitzer Prize winner, Theodore Roethke, a collection of nonsense poems and light verse.

“Funny thing about a chair, you hardly ever think it’s there,” he read in a vivid baritone voice. “To know a chair is really it, you sometimes have to go and sit.”

Stephenson saved his best moments of the morning reflecting on the research he had done for his Johnston County family roots back to the 17th century.

“It’s not easy, but it’s worth doing,” he says. “I got interested in family because I write about it.”

Part of his research included the genealogy of slaves owned by his ancestors, some of whom are buried on his family land.  His homage to a 10-year old slave girl, whom his great-great grandfather sold for $413.23 in 1851, became a 2008 long poem called ‘Family Matters: Homage to July, the Slave Girl’.

“I saw a copy of the citation of her bill of sale that I got from my sister in 2005, and I put a partial copy of that bill of sale on the front cover of my book because that was all I could find,” Stephenson recalled.

In trying to trace the slave’s history, Stephenson searched slave records, but to no avail until a friend found the bill of sale and sent it to him.

Later he said he believed the slave’s name was drawn from the time of year she may have been born, in this case, the summertime; hence the name July.

“She could be (buried) out there among the rest, I don’t know,” he reflects. “But I tell this (story) because I’m so into it.”

Stephenson says he never studied writing, but seems to write mostly about what he knows.  When he does, he says, it’s probably because he doesn’t know any better.

“My bias is poems,” he said. “I’ve tried to write stories, but the words get in the way. Words break down; they don’t do what they’re supposed to do.”

Stephenson read more poetic selections and confesses when he can’t express himself with the written word, he has his music.  He’s recorded several CD’s of songs, with one dedicated to one of the favorites of his youth, Hank Williams.

“Hank Williams was the Dylan Thomas of country music,” Stephenson remarked, making another reference to the Welshman considered by some the greatest poet’ that ever lived.

“I didn’t have books in the house when I was growing up, but I would hear these singers and I knew a lot of Kitty Wells, Roy Acuff, and all those old songs,” he said.

Stephenson’s recordings date back to 2004 and were recorded with his brothers, Paul and Marshall, and his wife, Linda.

He ended the session with sing-a-longs of gospel hymns and plenty from his Williams catalogue, including, ‘I’m So Lonesome I Could Cry,’ ‘Honky Tonk Blues,’ ‘Long Gone Lonesome Blues,’ ‘Your Cheating Heart,’ and ‘Hey, Good Looking.’  He pours the same passion into his songs as he does into his poetry.

During his time as poet laureate, Stephenson will be spending a lot of time on the road and has a busy schedule lined up, including more poetry readings and of course a lot of life with his songs.

“I’m going to have to come back,” Stephenson joked as the morning’s proceeding began to break for lunch, “because I never really got started.”

Just like his poetry: never rushed, never hurried, and always taking its time.