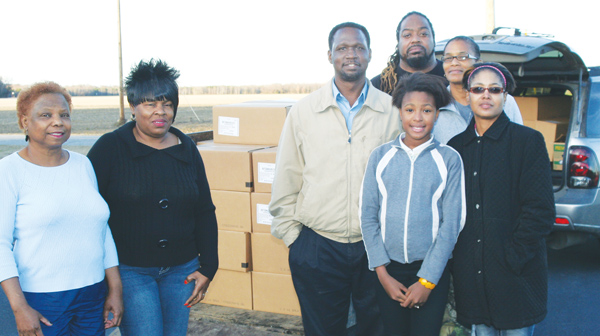 With stacks of food boxes in the background, Ishmael Muldrow (tan jacket) prepares to load up for distribution across Bertie County. Pictured are (from left, front): Flo Brockington; Brenda Gilliam; Muldrow; his wife, Sharon; and daughter, Shaniah; and (back row) David Hayes and Josephine Jenkins. Staff Photo by Gene Motley

“It was one pack of hot dogs, a case of chicken, and a small Hibachi grill,” Ishmael Muldrow recalls with a smile.

That was in December of 2012, when Muldrow began his own private food drive of giving away boxes of food across Bertie County.  He only had enough then to distribute to 30-to-40 people, but a year later that group had grown to 150, and two years later, with the help of God’s Community Bible Center in the Edgecombe County community of Princeville, and Open Doors Church in Rocky Mount, he is able to distribute food boxes to between 300 and 500 recipients.

Every Wednesday and Thursday throughout the month of December, Muldrow has carried out the distributions from the back of his sports utility vehicle.  The boxes of food contain canned goods and other non perishables, meats, dry-link sausage, bread, dried milk, and fruits and vegetables.  He has a small team of volunteers from Nash and Bertie counties that assist him, but mainly the runs are carried out with just himself, his wife, Sharon, and his daughter Shaniah. 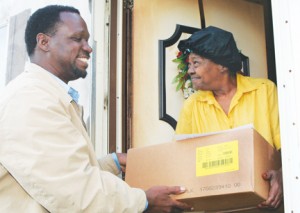 Fannie Louise Cobb of Merry Hill accepts one of the food distribution packages from Ishmael Muldrow during a stop for one of his Bertie County giveaways. Staff Photo by Gene Motley

The giveaways began in Windsor and have since spread across the county: to Lewiston-Woodville, Colerain, Powellsville, Aulander, and on the day of an interview, the News-Herald found him, in Merry Hill.

“One of the first things out of the mouths of people who receive this blessing is, ‘God bless you’,” he says.

Muldrow was born in New York but moved to North Carolina as a small child and spent his formative years in Colerain and Windsor, graduating from Bertie High School in 1988.

A “troubled teen” by his own admission, Muldrow says in the late 80’s he went through a life-altering experience that put him back on the “straight & narrow”.  In 1992 he was able to land a sales job in Williamston; but before that good fortune he came under the influence of James “Scarfi” Pugh, an Indian Woods politician who is now a Bertie County Soil & Water Conservation Supervisor.

“He has helped more people in Bertie County than you can actually imagine, and none of it is for financial gain, just a genuine desire to help people,” Muldrow says.

The idea of reaching out, making phone calls, dealing with people on a one-to-one basis are among the things Muldrow used for inspiration.   Following a two-year tenure in Williamston he moved to Raleigh and worked for BellSouth for nearly 20 years.  Success there took him back to his native New York for a five-year sales and training stint with utilities giant, JustEnergy in 2007.

Smitten with homesickness, Muldrow returned to North Carolina in 2011, moving with his family to Rocky Mount where he didn’t live a life of quiet retirement.  Instead, he followed another calling and became a minister where he says the idea for the food drive came to him in a prayer vision.

“We just sort of went from there,” Muldrow says. “We then started collecting recyclables, and as they grew we knew this was truly a blessing and a vision from God.”

Muldrow says the food distribution is only the beginning.  His eventual dream is to build a community center in Bertie County where everyone – young and old – can go for both resources and recreation.

“It would get our children off the street,” he added. “It would also help our elderly.”

Hope Community Center is what Muldrow says he will name the facility. His efforts have received the support of Bertie County Commissioner John Trent.

“What he’s doing is on his own,” Trent said in remarks following a Commissioners meeting earlier this month.  “For someone to be that dedicated and do these things is commendable.  He has asked for nothing from the people of Bertie County other than to come back and take care of the people of the county, and I’m there for support if he needs it.”

“Before you have a plan, you have a vision, and then the plan arrives,” Trent added. “I think he has that vision and it’s something that I think can be turned into a positive.”

At 12-noon on Christmas Eve, Muldrow and his Hope Community Center group partnered with the Brown’s Family Flea Market on Church Street in Roxobel to give away used – but not used-up – appliances, furniture, and household goods.

“It doesn’t matter if you’re rich or poor, middle or lower class, we want to be a blessing to everyone,” he declares.

“I want to show our young people that there are some good people out here who will help you,” he maintains.  “But we have to strive for greatness regardless of what we’ve been through.  We have to be a productive part of our community.”

As his Chevy Blazer rolled on through rural Merry Hill, Muldrow and family would stop at a home site, jump from the parked vehicle, and deliver a box of food along with a flyer that explained the work of, and vision for, Hope Community Center.

He is ambitious in his desire for the Community Center; he’d like a structure of at least 30,000 square feet.  He hopes large amounts of recyclables that his group is able to collect will translate one day into dollars.  So far, in Aulander, where an old metal chicken house has been converted into a warehouse, he is stocking aluminum, plastics, old appliances, even old cars that can be turned in for cash.

In addition to the churches, Muldrow says there are a group of five non-profits who assist with the project, in supplying much of the food to be distributed.  He hopes the Food Bank of the Albemarle in Elizabeth City will come on board, but first he has to find a large distribution facility.  Church leaders are also asked to encourage their congregations to donate their recyclables.

“The main thing that’s shut down so many of these ambitions projects is lack of funding,” Muldrow confesses. “We want to teach our children early on about making the donation of recyclables so this can exist for years to come.”

Muldrow feels he’s more than halfway toward his vision.  In the meantime, he says he will trust in the vision.

“If you let obedience lead you, there’s no way in the world you can go wrong,” he says determinedly, as he pulls his vehicle into another Bertie driveway.