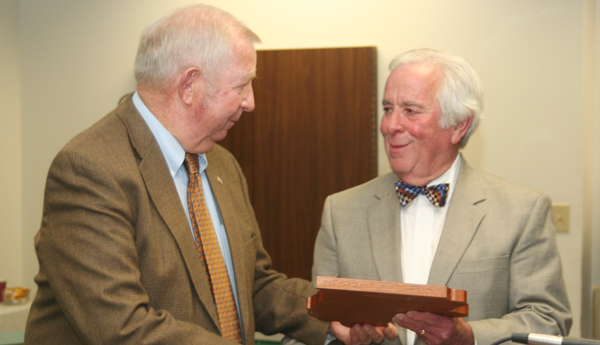 WINDSOR – Between them, they’ve served 36 years in local government.

At the end of November, Chairman J. Wallace Perry, Vice-chairman Charles Smith, and Rick Harrell – who’s served in both capacities during his 16 years – will step down from their posts on the Bertie County Board of Commissioners. 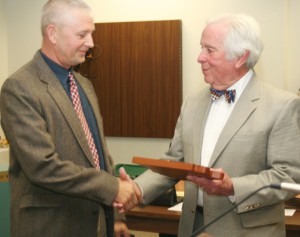 Monday, during the board’s regular session, they were honored for their service with plaques of appreciation.  On hand for the session were fellow county employees, guests, and others that packed the commissioner’s room.

Prior to the start of regular business and during public comments, retired Clerk of Superior Court John Tyler approached the rostrum carrying a large green tote bag.

“I feel a little like Santa Claus with this bag,” Tyler would later say, to giggles from the crowd. “And this didn’t cost the county a dime.”

Tyler called each outgoing commissioner up to the podium and presented them with a laminated and lacquered wooden plaque cut in the shape of Bertie County with a polished brass plate on which were engraved each commissioner’s terms of office. 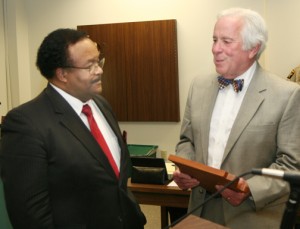 As Smith, the first commissioner to receive the ornament came and stood before him, Tyler read the crowd the words of the engraving, which were on all three commemoratives.

“Presented in honor and recognition of faithful service to the citizens of Bertie County,” Tyler intoned as he made the presentation to Smith to the applause of the assembled.  The District-5 commissioner quietly acknowledged the tribute before returning to his seat.

When Harrell, the District-2 commissioner approached, Tyler read some of Harrell’s own words that Harrell had himself spoken during a public hearing at the courthouse last month.

“During my 16 years of service to this county I’ve tried to serve with integrity, honesty, and moral soundness for all the citizens of the county,” Tyler read from prepared remarks. “I love this county and the people and I will continue to be a servant to help, assist, and promote Bertie County and I want to thank the citizens of the county for giving me the privilege, the absolute privilege, in allowing me to serve them for the last 16 years.  It has been my pleasure.”

Again, the commissioner deferred comment before returning to his seat.

When District-3 Commissioner Perry approached, Tyler gave a short humorous anecdote from Perry’s days as county sheriff and a poignant story of how Perry helped integrate the foremanship of the county’s grand juries while serving as the top law enforcement officer of the county.

“And he’s kept that practice, alternating back and forth between men and women, blacks and whites, until the court system adapted a blind draw,” Tyler stated. “(That is) thanks to Sheriff Perry and his open-mindedness and his fairness and willingness to judge people as people, and I commend you for that.”

Perry humbly acknowledged the accolade and quietly thanked the crowd as they stood and applauded.

Before taking his seat, Tyler read the North Carolina statute that defines the duties of county commissioners.

“North Carolina counties are legal entities capable of holding and managing property and possessed with many powers conferred on by law,” Tyler cited as he read from a small index card. “Through its Board of Commissioners the county exercises its powers and discharges its responsibilities.  North Carolina General Statute 153A-12 states that except otherwise directed by law, each power, right, duty, function, privilege and immunity of the county shall be exercised by the Board of Commissioners.”

Tyler concluded the impromptu civics lesson with words of praise as well as a charge of responsibility.

“That’s a great burden,” Tyler asserted. “(It is) a great duty placed on all the commissioners, old and new; and I want to commend all the commissioners for the service you’ve give n to the county and for my relationship and what you did for my office when I was in office, and I thank you.

“Well, maybe not the ‘old’ part,” Tyler humorously shot back.

“Thank you, Mr. Tyler,” Perry acknowledged as the board began its regular business agenda. “He’s a very good man.”