After hearing from two individuals representing nearly 30 others seated in the audience, the Northampton County Board of Commissioners delayed making a decision on rezoning over 473 acres of land along Lebanon Church Road from Light to Heavy Industrial. 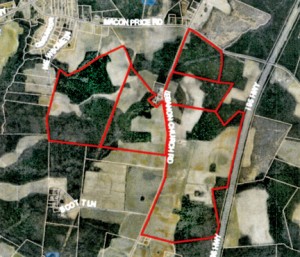 Shown here on a Northampton County tax map are the five properties (outlined in red) adjacent to Lebanon Church Road that are proposed to change zoning destination from Light to Heavy Industrial. The county commissioners have delayed making a decision on the proposal.

The Commissioners all agreed they needed more time to study the proposed rezoning based on the complaints of citizens living in that area adjacent to I-95 between Garysburg and Gaston.

One of those citizens, Belinda Joyner, presented Commission Chairman Robert Carter with a petition bearing in excess of 300 names calling for the rezoning proposal to be denied.

“Any plant that runs 24 hours a day, seven days a week is not light industry,” she said, adding she found it ironic that the Planning Board made its decision to change the zoning destination for the Enviva property and other four parcels just one day after she met with County Planning Director William Flynn and raised concerns about the wood pellet manufacturing plant.

Joyner reminded the commissioners of their duties, saying, “Ya’ll are elected to represent us, the citizens; to look out for our behalf, but everybody else comes in here and gets represented but us. Who profits from this?”

She noted that based on information she obtained from Flynn, anyone applying for a permit to operate a Light Industry in the county, “must demonstrate that no adverse impacts (will occur) such as noise, ground water or air pollution, or vibrations by proposed use.”

“You’ve heard others (at previous meetings) talk about the noise from Enviva; I can hear it and I live out on highway 46,” she said. “If you cannot clarify what’s going on already, then why this change?”

Joyner said she and others are not against economic development, but challenged the commissioners to, “bring something in here that will benefit the people.”

“A women can’t buy a dress in Northampton County; we don’t have a nice restaurant; rather we spend our dollars over in Halifax County….how does that help Northampton,” she asked. “Rather, ya’ll put something for economic development in here and holler about the jobs and people go crazy about that, but how many people from Northampton County are getting these jobs?

“Don’t forget that we’re tax-paying citizens too,” Joyner continued. “You need to represent us and stop rolling out the red carpet for others.”

Richie Hardy, another resident from the Lebanon Church Road area, also addressed the board about the proposed rezoning.

“I’ve gone door to door talking with folks near the (Enviva) plant and they all tell me about the vibrations, so bad that things fall off their walls inside their homes,” Hardy noted.

He mentioned the buffer zones required to separate residential and industrial areas.

“Coming into the facility from Highway 46, there are thick trees,” he said. “But go on the back side (of the property) along Macon Price Road and see where all the trees have been cut down. There’s nothing to stop the sound. If you really wanted to stop the sound you need to build a wall.

“It would be nice if these people could sleep at night,” he added. “There are about three (residential) properties there. What’s going to happen to them when they’re surrounded by all this commercial development land? They can’t sleep now and it’s only going to get worse.”

Hardy also mentioned the deteriorating condition of the roads in that area due to the increase of heavy truck traffic.

“These roads are torn up, plus these truck drivers have no regard to the safety of others on those roads,” he said. “One nearly hit a school bus full of children. These trucks need to slow down.”

The Northampton County Planning Board had given the proposed rezoning a favorable recommendation at their Nov. 13, 2013 meeting, forwarding it to the commissioners for consideration. Two of those five parcels consist of 120.17 acres at the current Enviva Pellet Mill and 40 acres at Clement’s Mechanical. The reminder encompasses three adjoining tracts of land (195.41 acres, 80.25 acres, and 37.76 acres) owned by the county in the Northampton Industrial Park.

Flynn said all the tracts – north of Blyth Road and south of Macon Price Road – were initially rezoned in May of 2005 from Agricultural-Residential to Light Industrial with the intention of developing the Industrial Park.

He told the Commissioners that in any rezoning action they must consider four items – the relative size of the tracts; the benefits and detriments of changing the zoning status; relationship of uses from one zoning designation to another; and compatibility with the county’s land use plan.

Northampton County Manager Ken Creque was asked by Carter to address the pros and cons relative to the rezoning proposal. He said that while there is no direct financial gain from changing the zoning designation, Creque did note several benefits….to include making the county more competitive in attracting major industry; the creation of high-paying jobs; expanding the tax base which helps lessen the tax burden on homeowners; an opportunity to grow innovative companies; and to protect and grow other businesses.

“We all want economic development, but this is a complicated situation,” said Commissioner Virginia Spruill. “I would like to see us table this issue and develop a plan of action, one that includes our Planning Department and this board to see what we can do about the reclassification of Light and Heavy Industry in our county. We also need to allow our citizens the opportunity to participate in this decision.”

“I agree, when you have this many citizens coming forth with concerns then we need to revisit the issue,” said Commissioner Fannie Greene. “Economic development is important, but our citizens are also important.”

“We can’t turn a deaf ear to our citizens,” he stressed. “Their comments, their wishes, their desires need to be heard. (The change to Heavy Industrial) more than doubles the permitted uses (on the property). In further discussions, this board needs to have those permitted uses identified so we can have a better understanding of what type of companies may locate here. There has to be some type of a happy medium in all this that everybody can buy into and support.”

“I’m in agreement with all on this board,” said Commissioner Chester Deloatch.

At the close of the public hearing, Spruill motioned to table the rezoning proposal and bring it back to the commissioners for consideration at a later date. Greene offered a second and the motion passed without objection.

Joyner asked Carter to let her know on what date the commissioners will re-address the rezoning issue.