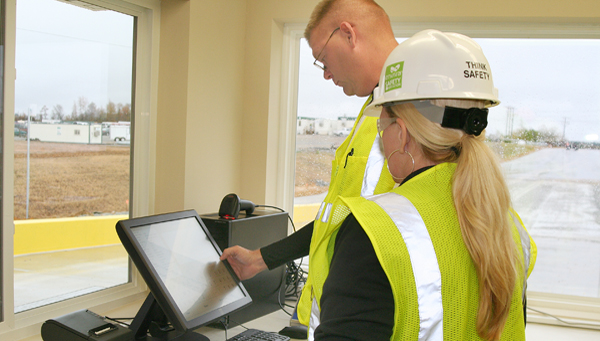 Clint Pernell and Tiffany Bolton enter information into a database about Enviva Northampton’s first shipment of logs. The plant will have approximately 260,000 tons of wood waiting to be processed into wood pellets when it begins production. Staff Photo by Amanda VanDerBroek

GARYSBURG – In the cold wind and rain a truck full of tree logs was like a ray of sunshine for employees at Enviva Northampton.

On Tuesday, Enviva welcomed its first shipment of logs to its Northampton facility, which is still under construction with an expected commission date in March. The load was transported by Frankie Advents Trucking from Woodridge Timber in Jamesville.

“This is exciting,” said Ann Hudomint, Fiber Supply manager at the facility. “We’re looking forward to building a relationship with loggers.”

This delivery of timber will be the first of many for the facility, which will have approximately 260,000 tons of logs waiting to be processed into wood pellets when the plant begins production.

Hudomint said there are two reasons why Enviva is in Northampton County; one, because of North Carolina’s long history of sustainable forestry and second, the professional supply chain of loggers.

The Northampton plant will process primarily hardwood with some pine. One million tons of wood per year will purchased for the facility.

According to Plant Manager Roland Burnett Jr. once the plant is up to capacity it will be able to produce up to 500,000 metric tons of pellets annually. A truck transporting the pellets will be leaving the plant every 23 minutes to deliver the product to the company’s deep water port operations in Chesapeake, Va.

Many of Enviva’s customers are electric utilities in Europe who use the pellets to operate power plants in place of coal, reducing their carbon footprint.

Once the logs are delivered to the plant it is weighed, measured and details are taken down and entered into a computer database.

Burnett said the wood is processed by way of grinding the wood down, which is then put through a die to form pellets. He added the reason the wood is formed into pellets is primarily for shipping purposes.

In addition to the Northampton plant, Enviva currently has two facilities in Mississippi, one in Ahoskie, and a plant for Southampton County, Va. was announced last year.

Northampton Enviva is a $60 million investment for the company and will employ about 80 people, several of which have been hired, from the Northampton County and the Roanoke Rapids area.

Northampton falls in round three