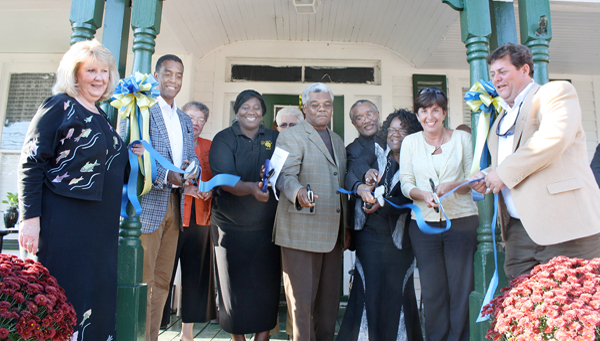 Dignitaries cut the ribbon that formally opened “The Hive” - a community resource center that serves the Lewiston-Woodville area. Photo courtesy of the Bertie Ledger-Advance

LEWISTON WOODVILLE – It was literally the rebuilding of a dream.

The Bertie County Family Resource Center here closed its doors due to state and local cutbacks. The center lost its funding from North Carolina and saw its local money cut by $10,000.

“We couldn’t afford to pay $500 a month in rent anymore,” said Vivian Saunders, who headed the project. “We were struggling.”

Saunders had an idea, however, and all it took was a telephone call to get things stated to have a community center back in Lewiston. The call went to the Rev. Gary Cordon of Victory Temple.

“Victory Temple had a house just sitting there and it was in bad shape,” Saunders said. “I called him and asked if we fixed the house could we use it for the resource center and he agreed.”

That’s when volunteers began working together to restore the house to usable condition. The Hivesmen began volunteering to work on the house along with the Bertie High School JROTC.

Saunders also began work with One Economy to find those who were willing to make the dream a reality again in Lewiston Woodville. It didn’t take long before Perdue Inc., Bestway and Rent-A-Center were signed on to provide assistance to rebuild the house.

It took just a year before The Hive House opened its doors during a ceremony late last month. The new community center is located on Mitchell Street and will serve the citizens of Lewiston Woodville region.

“The Hive House is the dream of Vivian Saunders, and the embodiment of what One Economy has been working toward for over 10 years,” said Sonja Murray, Senior Vice President and Chief Program Officer of One Economy. “We have always firmly believed in the power of public and private sectors combining forces to better serve community around the country. We couldn’t be more proud of Vivian and what she’s accomplished here.”

The Hive House, a joint endeavor of One Economy Corporation and the Bertie County Family Resource Center, will be home to a technology and job center, a food bank and after school programs for Bertie County youth.

Saunders said The Hive House was already working with more than 30 youth and providing service to the community. Among the services is being an online center to allow residents to apply for jobs at Perdue. They also offer digital literacy classes.

While many donated time and materials to see The Hive House become a success, perhaps no one gave more than Saunders, who contributed not only time, but her own finances to the project. She continues to work unpaid as the Executive Director.

“I’m willing to give my all for this project,” she said. “My husband and I gave everything we had to make it a priority. My mother, who I lost three weeks ago, urged me to make this happen. She was a driving force in pushing me to do this in Lewiston.”

Additionally, local residents John Trent, Tim Bazemore Jr., Jeffery Felton and Oscar and Bonnie Jones were all instrumental in making the Hive House happen. Finally, the Senior Hivesmen, who were a part of the original Hive in Bertie County, also pitched in with some “sweat equity,” helping to paint and refurbish the house itself.

“The Bertie County Resource Center provides valuable services for people across Bertie County, including our associates,” said Jeff Stalls, Perdue director of operations in Lewiston. “We’ve had a long relationship of support for Vivian and the center, and we were pleased to provide a $20,000 grant through the Arthur W. Perdue Foundation to help fund the remodel of the new home for the Hive House.”

“The outpouring of support has been inspiring,” said Bestway Rent to Own’s Jonathan Rose, who noted Ashley Furniture completely furnished the new building and independent rent to own dealers continue to send in contributions. “Vivian has had so many different obstacles and difficulties like recently losing her mother, and through it all she’s been so optimistic. She pushes on because she knows she’s making a difference in the lives of these kids.”

Guests of the grand opening were treated to a tour of the new center, and enjoyed a short program from the people who helped make The Hive House a reality.

“There was a time not too long ago that no one believed in “The Hivesmen” but me and One Economy,” said Saunders. “I am so grateful for the support we’ve received for this project from One Economy, along with Perdue, Best Way Rentals and Rent-a-Center. And, although we are opening, we are still fundraising and have repairs to make in order to fully complete the house. I plan to work tirelessly to make certain The Hive House makes a difference in my community.”

Shields named Principal of the Year