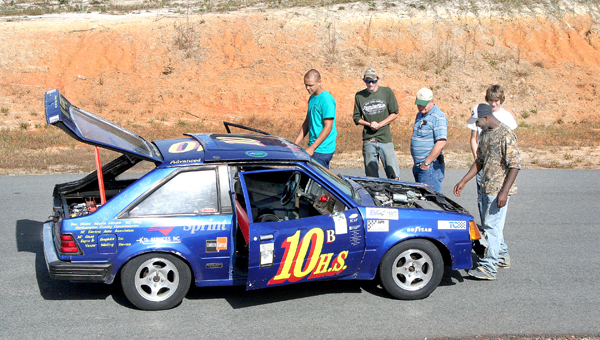 Members of Northampton NEAT perform a last minute check of their electric vehicle prior to the range competition, part of last weekend’s EV Rally held at the North Carolina Center for Automotive Research. Staff Photo by Amanda VanDerBroek

GARYSBURG – It’s the only auto competition where lead acid or lithium batteries are all the talk in the garage.

“It gives them (the students) practical experience, something that they actually have to put their hands on, and critical thinking skills,” he said

NEAT has approximately 20 students involved with the team. The Electric Vehicle Program at NCHS is no longer an offered class, but an afterschool activity for students.

“The kids work on the vehicles during their free time,” he said.

NEAT’s rally is part of the Electric Vehicle Challenge and next spring a larger EV rally is being planned at the NCCAR site.

“Simon and Sam have been most gracious,” Pope said.

WINDSOR – The next step for the new Bertie High School is a big one. The sale of the Qualified... read more