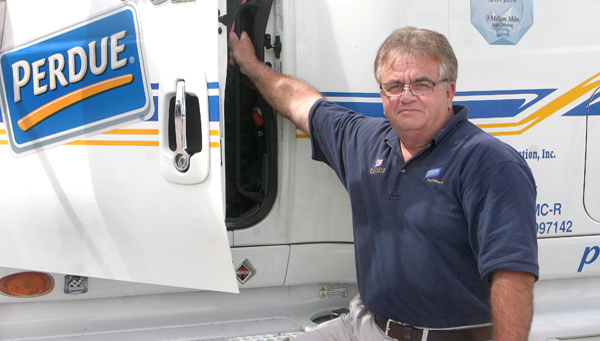 Since launching his professional driving career with Perdue, Alvin Smith has logged in excess of three million safe driving miles on the nation’s highways. For reaching that milestone, Perdue awarded Smith an all-expense paid vacation to Alaska. Staff Photo by Thadd White

LEWISTON WOODVILLE – For more than 30 years, Alvin Smith has been making a living driving down the highway.

Just days before National Truck Driver Appreciation Week, Smith sat down with a group of local reporters to talk about a milestone in his career – reaching three million consecutive safe driving miles.

Smith, who has spent the last 30 years driving for Perdue Transportation Inc., achieved the milestone late last year and is working diligently toward the next. He became the third driver for Perdue to reach the three million mark. There are 21 who have reached two million safe miles for the company and another 57 drivers at the one million level.

During an average year, Smith said he drives more than 110,000 miles for Perdue, usually a week at a time. He said he likes to leave home on Sunday night and that he makes the trip to whichever location he is assigned from there.

Upon arrival, Smith said he is informed if he has something to bring back to Perdue in Lewiston Woodville or if he is picking up a load to head to another location.

“At the end of the week they’ll try to get me closer to the house and then, finally, when my time is up, they send me to the house,” Smith said.

“When I go to Chicago, I can only drive 11 hours then have to have a 10-hour break,” he said. “When I leave here and go to Chicago, I have to stop somewhere around Cleveland, Ohio. The next morning I get up and make my delivery and they let me know if I have to pick up something in Chicago or the suburbs of Chicago.”

Smith said stopping after the 11 hours on the road was sometimes difficult because there were times he didn’t think he needed the rest. He said federal regulations require it, however, and that Perdue strictly enforces the directive. He said it always turned out to be for the best, however.

Making trips from the rural environments like northeastern North Carolina into Chicago or other major cities can be challenging.

“Any big city to me is just alike as far as traffic,” he said. “You have the same quality of people there; everyone is in a hurry.”

He said people will cut you off and that traffic is always difficult.

“Sometimes we can time it so we go through a big city without (rush hour) traffic, but sometimes you can’t,” Smith said.

Despite the traffic, Smith has maintained his safety record and he said being smart about how you drive in those areas was the key to his success.

“You have to go slow, watch out and don’t tailgate,” he said.

Sometimes that makes the trip difficult because people will slip into the space truck drivers leave between themselves and other vehicles.

Smith said he had learned to be patient and do what it takes to avoid accidents.

Perdue counts both preventable and non-preventable accidents, meaning Smith has avoided any type of accident, down to simple scratches for three million miles. He said overall he had been part of three accidents since 1982 and that all of them occurred on the ground of a plant.

“All three together probably didn’t total $100 worth of damage,” he said.

Still, the three million miles have come after those three incidents.

Perdue awarded Smith an all-expenses paid trip to Alaska for reaching the milestone. He said he was thankful for the experience.

Smith said that at age 55, he believes he has the opportunity to become the first driver in company history to make four million safe driving miles. He said he felt like he could drive another 10 years before retirement.

Looking back, Smith said he believes he was born into being a truck driver.

He said he never went to school to drive professionally.

As for the best part of his job, Smith said it was the things he has been able to see by being on the road.

“I like seeing different things,” he said. “Tuesday for instance, I was in Brooklyn looking at the new World Trade Center they had just built. It had the red, white and blue lights on it and it was so pretty.

“It was on the anniversary of 9-11 and I would have never been doing that if I hadn’t been driving a truck,” he added.

He said he also had several good encounters during his years. One happened recently when he was on the side of the road waiting for a tire to be changed.

“I was just sitting in my truck waiting for the guy to come and change my tire when a car pulled up beside me,” he said. “This guy came up and banged on the door and handed me a cup of McDonalds coffee and cream and sugar.”

He said the guy purchased the coffee and brought it to him and told him the Lord told him to do it.

“I love coffee,” he said. “That guy did about the sweetest thing I know of at the time. I thought it was really, really nice that a guy did that.”

He said there were also civic organizations that did safety breaks for truckers, especially during the holidays and he appreciated it.

Overall, Smith said he had enjoyed his career and he appreciated the company he worked for and their commitment to safety.

And the company has a man who is committed to safety as well – Alvin Smith, the three-million mile man.