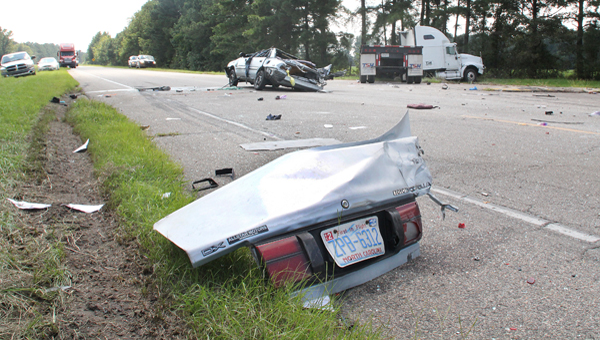 Debris, including the rear deck lid from the car shown in the background, litters both lanes of NC 11 at the South Main Street intersection in Lewiston-Woodville early Tuesday afternoon where a Pitt County man died in a three-vehicle accident. Staff Photo by Cal Bryant

LEWISTON-WOODVILLE – It was a deadly 32-hour period near here as two men from Pitt County were killed in separate motor vehicle accidents just a few miles apart.

The most horrific of the crashes occurred shortly after 1 p.m. on Tuesday where two tractor trailers and a passenger car were involved in a fatal mishap that shut down NC 11 for nearly six hours.

Jonathan Taylor, 25, of Bethel lost his life in that crash. He was a front seat passenger in a Toyota passenger car driven by 24-year-old Sophia Worsley, also of Bethel. Worsley was airlifted to Vidant Medical Center in Greenville where her condition is unknown.

According to the accident report filed by North Carolina Highway Patrol Trooper J.V. Reid, Worsley’s vehicle was traveling north on NC 11 at which time she slowed to make a left-hand turn onto South Main Street (the Woodville end of town). The car was struck in the rear by a northbound tractor-trailer owned by Shavender Trucking of Pantego and driven by Fred Dupree, 40, of Ayden.

The 18-wheeler pushed the car into the southbound lane of NC 11 where it was struck again, this time by another 18-wheeler owned by Tennessee Steel Haulers of Cofield and driven by Johnny Moore, 46, of Conetoe.

Based on information obtained by Reid from Moore, the car went airborne after the second impact and came to rest on its roof in the northbound lane of NC 11 at a point very near where it was struck by the first truck.

Following impact, Dupree’s truck crossed the centerline of NC 11 and came to rest in a ditch off the southbound lane. Meanwhile, Moore’s truck traveled off the road to the right, ran across the South Main Street intersection and into a ditch. Neither of the truck drivers was injured.

Thirty-two hours earlier, Reid was also the investigating officer in a two car crash that claimed the life of another Bethel man.

This accident occurred at 5:14 a.m. on Sunday at the intersection of NC 308 and Jack Branch Road east of Lewiston-Woodville. There, Larry Williams, 25, of Lewiston-Woodville was operating a Ford passenger car that was traveling west on NC 308. At the same time, another Ford passenger car, this one operated by 22-year-old Antonio Sessoms of Windsor, was traveling east on NC 308.

Reid, based on his investigation, said that Williams allegedly turned his vehicle, in an attempt to access Jack Branch Road, in front of Sessoms’ car, causing it to be struck in the right rear passenger’s door. It was there that Ronnie Peele, 21, of Bethel was seated and he died as the result of injuries suffered in the accident.

The two fatalities were the eighth and ninth in the NCHP’s Troop A/District II area for 2012. Of those nine fatalities so far this year, four have been in Bertie County.

Phyllis Hale, the widow of the Rev. Wint Hale Jr., is presented a resolution honoring her late husband by Murfreesboro... read more