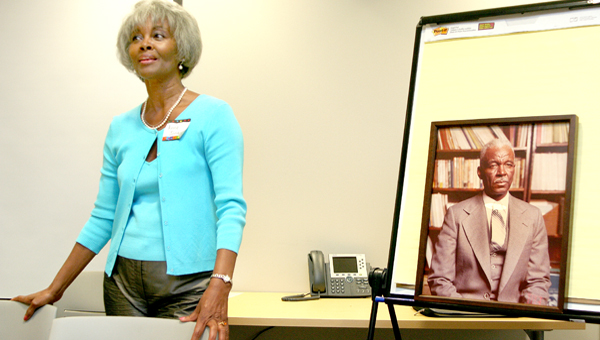 Anna Jones stands with a portrait of her late father, James H. Jones, prior to previewing a film on his legacy. Staff Photo by Amanda VanDerBroek

Recently, family, friends and supporters of Anna Jones’ “Chairman Jones: Portrait of My Father” gathered at the North Carolina Center for Automotive Research (NCCAR) to view a trailer of the film documentary. The film chronicles the life of Garysburg native James H. Jones, a well-known educator and Civil Rights trailblazer.

“The people who are here are the people who supported this project when it was just words on paper,” said Jones, who has been working on the film since 2009. “I wanted the community of supporters to see what I’ve done so far.”

Born to a family of sharecroppers in 1916 on Longview Plantation, Mr. Jones learned the value of an education when his own was cut short because of work and Jim Crow Laws.   James H. Jones rejected his plight and eventually became the first black man to serve on the Northampton County Board of Education. His historic appointment to the Board of Education came in 1971 and he was voted chairman 10 years later. Jones’ life and work ended tragically in a farming accident in 1984.

During her presentation, Jones showed gratitude to those in the audience as well as the members of her committee, among them her siblings, Alice, Wiley and Wayne Jones, and her son, Khalil Mack. She also thanked her former husband, Carlton Mack, who helped kick off the project by donating seed funding for the project.

Jones said documentaries are the new way of telling stories and recording history.

“Photos and videos have the power to tell a story with much more impact than words do,” she said. “They are able to bring audiences into a brand new world. It’s about documenting the truth.”

She noted how the documentary genre is growing and it will play a vital part in educating younger generations.

Jones said the film piqued not only local interest, but enthusiasm from national and international levels from those intrigued by this part of American history.

“We’re going to be on the map for this one,” she said.

Jones said the idea for the documentary actually began following the death of her mother in 2007. With her Radio Shack tape recorder in hand, Jones set about interviewing those in the community, including Lucille Hardy, the late Melvin Broadnax and Marshall Grant.

“These people started telling me stories that were just fascinating,” she said. “I was amazed. …they told me about leadership and the changes that were taking place during that time. I thought this would make a good documentary.”

Jones started by interviewing the senior citizens in the community. With the documentary she said she wants to “put up a mirror” to the county’s history.

Jones noted Grant, who was a white, conservative, Republican, worked with her father, a black, liberal, Democrat.

Jones previewed a 10-minute trailer on the documentary, which featured an array of interviews with local citizens, professional state sources and historical photographs. Jones said the project still in progress as she wants to create an hour long high quality film. In order to achieve that mission, Jones noted the project takes time and money.

“My goal would be to submit a trailer to foundations and funding sources who are interested in education, social justice, leadership, community uplift, and I have identified some,” she said.

Jones said she still needed support from the community by way of historical photographs (including those of W.S. Creecy School and Willis Hare School), yearbook photos, report cards and video footage of her father at school functions, making speeches possibly at graduation ceremonies.

“All of this is part of the images that we need,” she said. “I need all of these kinds of things to tell the story visually to help put the audience in this place….any images that tells us this is a slice of Northampton County.”

Following the preview, Jones received positive feed back from the attendees, who encouraged her to move forward with the project.

“I think you’ve done an excellent job and certainly what you’ve presented to us tonight brings a lot of pride to us as a people here in the county,” said the Rev. Robert Sessoms. “I just believe when you are done it will make this entire county proud, the entire state, we have something to pass on to our children and grandchildren. Just continue.”

Most agreed that though future generations could benefit from seeing the film, current educational leaders could also benefit as well from “Chairman Jones”.

Following her presentation during an interview, Jones said she was encouraged by the reactions she heard from the supporters.

“I was moved by the reverence they still have, the respect they still have for my father, and the legacy that he left as far as patience and (his belief) that education is key,” she noted.

She also sensed there was a need for healing in Northampton as far as education goes as well as race relations.  Jones said she believes the film has the potential to touch those progressive thinking people in the county and incite change.

“We’ve done it before and we can do it again, some one needs to stand up and say let’s do it,” she said.

Jones said she was pleased with the positive feedback she received from her guests.

“It’s like being an artist and you’re putting it out there for the first time, and you don’t know what the reaction is going to be like,” she said. “This is encouraging so then I can keep moving, it can give me more energy to keep going because this is a long haul; it’s a lot of work.”

I don’t love baseball…there I said. Maybe that makes me less American, if so then so be it. I appreciate... read more