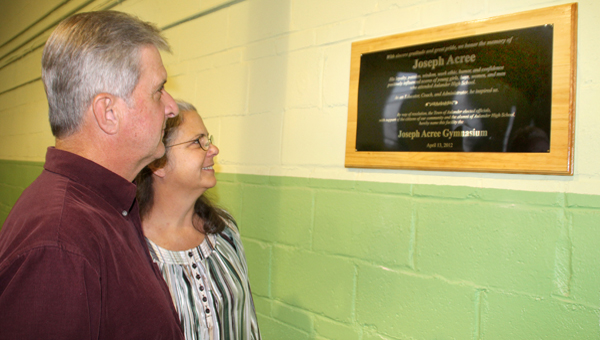 Edmond Joseph Acree III and Betsy A. Baker admire the plaque that dedicates the newly remodeled gym in Aulander to the memory of their late father, Edmond Joseph “Joe” Acree Jr. Staff Photo by Cal Bryant

AULANDER – Nearly four and one-half years have passed since the tragic death of a beloved educator and friend to many here in this Bertie County town.

Despite that passage of time, the life and legacy of  Edmond Joseph “Joe” Acree Jr. remains as fresh today as it did during the time he spent teaching and coaching at the old Aulander High School, and later as an Assistant Superintendent for Bertie County Public Schools.

On Friday afternoon, those whose lives were touched by Acree gathered inside the newly remodeled Aulander gym and dedicated the 65-year-old facility in his honor and memory.

“Joe Acree was a man that was respected and admired by many in our community,” said Aulander Mayor Larry Drew, one of Acree’s former students and basketball players. “This dedication ceremony is just a small token of the town’s appreciation for all his years of service to Aulander and Bertie County.”

Drew called Acree as a man of compassion, always there to provide encouragement to the young people of the town and Bertie County.

“We’re all better people today because Joe Acree was once in our lives,” Drew noted. “He was full of understanding and compassion. I know he made a difference in my life.”

The school’s senior class of 1960 dedicated the AHS Yearbook to Acree, saying, “Because he taught us sportsmanship above victory; because he’s given us values, not always part of the normal instruction; because as a teacher he has always been capable, conscientious and fair; and because, above all, he is our friend.”

“We all are blessed to have known Joe Acree,” Drew said. “We are all thankful to have had him as a teacher, as a coach, and as a friend.”

Drew presented Acree’s son and daughter – Edmond Joseph Acree III and Betsy A. Baker – with a plaque from the Town of Aulander that dedicated the gym to the honor of Edmond Joseph “Joe” Acree Jr. The plaque – which praised the wisdom, influence and inspiration bestowed by Acree to the boys and girls of Aulander High School as well as the adult men and women of the town – was mounted on a board from the original gym floor.

Aulander Town Council members Phillip Thomas and Bobbie Parker unveiled a plaque in Acree’s honor, permanently mounted to the wall just inside the main entrance to the gym.

“I was always so proud of my daddy,” said Edmond Acree III. “Anything you did in life to make yourself better, he’d always encouraged you to do more and that’s stuck with me for a long time.

“Daddy loved this school,” the son continued. “All of you that have spoke so highly of him, I thank you for your words. This is a great honor and thank you so much for remembering him in this way.”

Not only was Acree an educational leader in the local community and the county, he was a member of Aulander Baptist Church, where he served as a deacon and taught Sunday school for 15 years.

He died at the age of 83 on Nov. 29, 2007 while enjoying another of his passions – hunting. Tragically on that day, Acree fell to his death from a tree stand while hunting near Dean’s Crossroads.

Other than his son and daughter and two grandchildren, Acree is survived by his wife, Nancy Dunning Acree.

Drew shared the story of how the effort came together, starting in the summer of 2006 to restore the old gym.

“There were many who grew up here in Aulander that wanted to see some of our landmarks saved,” Drew said. “We wanted to see our old ballfield and this gym come back to life.”

“They all embraced this dream and helped to make it real,” Drew said.

Town officials teamed with the Aulander Ruritan Club to further strengthen the project, which included not only the gym, but the ballfield which has now returned to its glory days of years past and serving as the hub summer youth baseball and softball leagues.

“The town, as well as the Ruritans, provided monetary support to make both projects happen,” Drew said. “As a matter of fact, the town, in 2007, paid for a new roof to cover the gym and paid to replace the windows.”

The Mayor added that Lassiter recruited other volunteers to patch the holes in the gym floor.

“Later they got some old cabinets from Chowan University, completely refurbished them and installed them up front in the (Bertie County) Nutrition Site,” Drew stated.

The Golden LEAF money was used to install a beautiful new floor for the gym.

“That project is nearly finished,” Drew said of the new flooring. “To everyone who worked so hard to make this dream come true, I thank you on behalf of the Town of Aulander.”