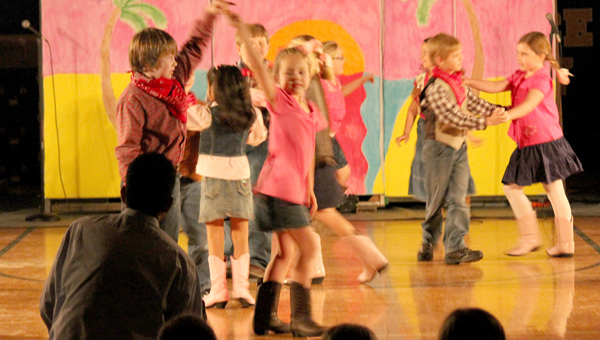 Students at Lawrence Academy’s Festival Latino demonstrate a dance for the crowd. The sixth annual event was one of the best in the school’s history. Contributed Photo

The sixth annual event took place earlier this month and served as a kickoff to International Culture Week at the school.

“I’m really happy to see Festival Latino become part of the school culture,” said Luis Giron, Lawrence’s Spanish teacher who started the event. “The most important thing is that students learn a valuable lesson about life.”

Festival Latino is a showcase which features students displaying Hispanic culture through singing and dancing. The school’s Spanish classes and Club Espanol participate in the event.

Giron said the festival was started as a way to fulfill the school mission and aid students in Spanish classes.

“We have discovered a lot of talent over the years,” Giron said. “We have had many students with skills in singing, dancing and acting.”

Each year the event is performed twice, one for the students and staff of the school during the academic portion of the day and the other time at night when family, friends and other friends of the school are invited.

This year the event featured two special guests – Webster Daniels, who was one of the school’s founders, and Jose Gil, Professor of Linguistics at Elizabeth City State University.

There were also three alumni who came back to help in the performance. They were Jennifer White, Blake Mizelle and Hannah Evans.

The event was well-attended with more than 300 people coming to see the festival.

“We were very appreciative of the sponsors,” Giron said. “We used their help to make the event a fundraising project for our annual fund.”

Giron also said he felt this year’s audience was the best yet.

“I was so happy to see the response of the audience and the energy and enthusiasm of our students,” he said. “This is something that is growing every year. Each year the event is more anticipated than the year before.”

Giron said the event was good for students and helped them learn more about other cultures.

“The final meaning is to believe in ourselves,” he said. “We want our students to believe everything is possible. A lot of people said the show was uplifting and inspiring.

“The Festival Latino opens the window to see other people and other cultures,” he added. “The students took the audience to those countries.”

Lawrence Academy Headmaster Thomas Gregory said he was proud of the event.

“I think it is something you don’t see in other schools in the area,” Gregory said. “It’s a unique experience. I am also thankful for the sponsors because they play an important part in our school outreach.”

AHOSKIE – Wild dogs are to blame for the deaths of three pets near here over the past several weeks.... read more