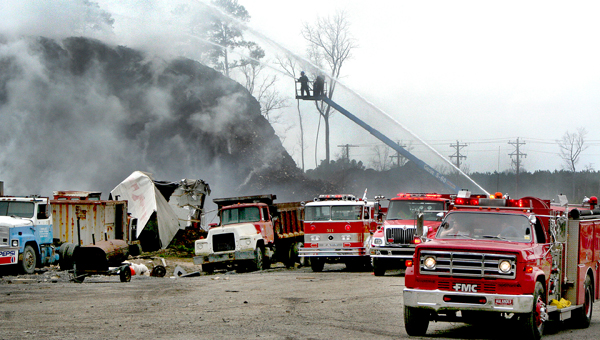 Firefighters are shown battling Monday’s fluff pile fire at Liverman’s Recycling on NC 11 near Aulander. It took a total of six departments over two hours to bring the blaze under control. Staff Photo by Amanda VanDerBroek

The original call came in at 10:32 a.m. to Bertie County Central Dispatch and the Aulander Fire Department was paged out to a fire at the fluff pile at the facility. It is the second time the pile has caught on fire since November.

“Compared to last time the fire was under control pretty quickly,” Interim Bertie County Emergency Management Coordinator Misty Deanes said. “After being called out shortly after 10, most of the units had cleared the scene soon after noon.”

In addition to the fire in November which took seven departments more than eight hours to extinguish, there has been a third blaze at the facility, but it did not involve the fluff pile.