It also leads to opportunities for advancement.

“I’m excited by the opportunity at East Carolina,” Overton said. “Obviously it was a promotion, but there were other things that made this situation the right one. I am looking forward to making my own mark and bringing my own ideas to the organization, for one. 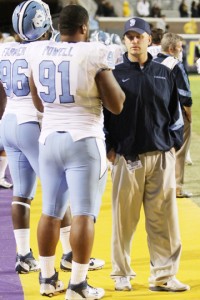 “Also, the chance to work for Ruff would have been really hard to pass up,” he added. “He is a great guy and well-respected in this profession. It was also nice to get back closer to home.”

For the past three years, Overton had served as Assistant Director of Football Operations at the University of North Carolina at Chapel Hill. He was hired by former Tar Heel skipper Butch Davis and earned acclaim for his ability to recruit.

While Overton developed and coordinated UNC’s game day operations effort for recruiting visits, his contributions reached far beyond establishing detailed weekend itineraries. As a recruiting liaison to the department’s compliance office, he helped administer a program that documented all official visits, evaluations, contacts and phone calls.

He said the opportunity at ECU was too much to pass on, but also has good memories of his time at UNC.

“It was a good experience,” Overton said. “That’s a great place and I appreciate having had the opportunity to work under Butch in my first college job. That was huge for me because of the NFL experience he has and also because of the respect he has earned in general.

“He demanded a lot from us, but I learned so much that was priceless,” Overton added.

Overton said some of the things he learned will be of great value as he makes the transition to Greenville.

“I think I bring some new ideas to East Carolina and I hope that my history in this state will be of benefit. We are going to put a real emphasis on keeping the best players in the state here at ECU. They’ve done a good job, but we want to even improve on that. We want to get to the point those kids want to come here.”

Overton said in addition to the local recruiting, he believed some of his experience recruiting nationally at UNC would help him as he made the transition to East Carolina.

Another key to success, Overton said, will be his work ethic.

“I’ve always said I won’t be out-worked,” he stressed. “If a player doesn’t come here, it will be because he doesn’t want to, not because we didn’t work hard enough to get him here.”

“I want to help take this place where I believe it can and will go,” he said. “There has always been a really good football tradition. I want to be part of the front end of taking it to the place it can go.

“ECU has the best Game Day in the state, great facilities and Greenville is a great college town,” he said. “We have all the tools right here to make this a great football school.”

As he moved to the next step in his football career, Overton has made it clear he never intends to forget his roots in the Roanoke-Chowan region.

“My roots are important to me and I’ve never shied away from that,” he said. “Growing up there, playing there and starting my career there were huge for me. The people there gave me an opportunity.”

Overton said he was thankful for the coaches he worked with and the student-athletes that he coached during his time as a football and basketball coach at Hertford County High School.

“I tell those kids all the time they inspired me to do more,” he said. “Those kids really set me up for success. I promise you I learned as much from them as they did from me.”

Overton also is thankful for his years working under HCHS Athletic Director Charles Simmons, who he points to as one of the great mentors of his life.

“Starting in this profession under Coach Simmons is so important to me,” he said. “He is respected on the high school level the same way Butch and Ruff are on the college level.

“Coach Simmons taught me how to be a professional,” he continued. “That was huge for me starting off.”

Overton, 30, is a graduate of Elizabeth City State University. In addition to his time at HCHS and UNC, Overton spent one season as co-offensive coordinator at Greene Central High School. He also served as the Co-Coordinator for the Shrine Bowl Combine.

He is the son of Johnny and Shirley Overton of Ahoskie.