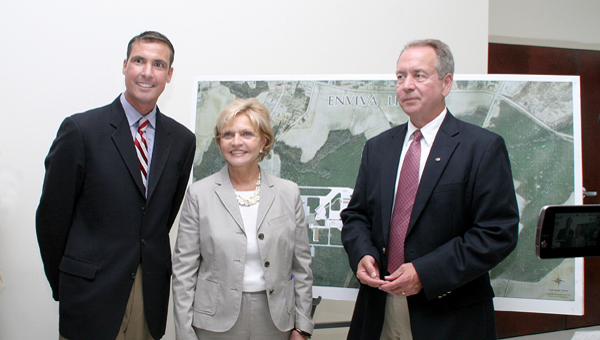 In a joint announcement by North Carolina Governor Bev Perdue and Enviva Chairman and CEO John Keppler, the company will open a second wood pellet manufacturing facility locally, this one at the Northampton County Commerce Park located on Lebanon Church Road near I-95.

The mill, which comes with a $60 million investment and 62 new jobs, is designed to produce 400,000 metric tons of wood pellets annually. It is scheduled to open in October of next year.

Coupled with Enviva’s new mill now under construction in Ahoskie, the company’s total production capacity in the two counties will be 750,000 metric tons. The Ahoskie mill, which will also employ 62 workers, is expected to begin operations within the next two months.

“We understand the values possessed by Enviva and the value change they are bringing to northeastern North Carolina,” Gov. Perdue said during her remarks made in front of a large audience gathered at the Garysburg Town Hall. “They’re here, and they are going to stay here. I believe because of the work force in this area that they will grow in Northampton County.”

The Governor stressed that some across the nation doubted the impact of “green” jobs.

“These are real jobs; they are a piece of the 21st century world we’re living in,” she noted. “This is all about transitioning. The forest services backbone that we know so well in North Carolina continues to produce jobs. We can turn green into gold here in Northampton County and North Carolina. That translates into paychecks and a broader tax base.”

Despite the fact that Enviva is a relatively new company (founded in 2007), the Governor praised them as a “major investor in eastern North Carolina.”

“The Ahoskie plant comes on line in October, that was the starting point,” Gov. Perdue said. “Then I receive a call from our commerce team that there was a potential movement in Northampton County for Enviva to expand. This is an exciting time; this is the start of something big.”

She went on to praise Enviva for not only its investment in the two counties and for using wood from local landowners, but also for the company’s commitment to the environment through the use of renewable sources that pollute a lot less than fossil fuel.

“These little pellets can power the world, and they’ll come from North Carolina,” Gov. Perdue said. “Enviva chose you in Northampton County because of the quality of your workforce and the abundance of your resources – God sure did plant a lot of trees here in eastern North Carolina.”

“The people here in this room – the mayors, the commissioners, the local economic developers, the state representatives, all the way to your (Gov. Perdue) office – made this happen,” Keppler stressed. “We are strong fans of North Carolina and we’re delighted to be here, just as we were less than one year ago when we announced plans for our facility in Ahoskie.”

Holding a small jar full of his company’s finished product (wood pellets), Keppler said while green technology was new, forest products are not.

“People here have known for a long time that timber is a core part of the economy,” he stated. “We may be doing new things, but we’re doing traditional things in untraditional ways. These pellets are shipped to major utilities throughout the world while we look to do something better for our environment. We’re looking to make North Carolina the leading exporter of solid biomass.”

“We welcome Enviva to our community and look forward to a long and lasting relationship,” she said. “We thank you for your investment and for bringing much needed jobs here.”

Those jobs are not restricted to the new manufacturing facility as local logging operations will benefit. There is also the need to transport the pellets to Enviva’s holding facility at a deep water port in Chesapeake, Va.

In a later interview with the Roanoke-Chowan News-Herald, Keppler said the Northampton mill will be similar to the one in Ahoskie, both primarily dedicated to manufacturing wood pellets from hardwood pulp products. When asked if Enviva would look to invest in pine pulp, Keppler said, “As we grow pretty aggressively in this region, I expect over a period of time that we will begin to source a significant portion of pine as well. Right now, the business model we’ve been able to grow is from the harvesting of hardwood products.”

However, both the Ahoskie and Northampton facilities are capable of handling hardwood and softwood pulp depending on the availability of raw materials.

He said the need for immediate expansion was due to the long term contracts Enviva has with its customers in Europe and elsewhere.

“We need to bring the Northampton facility online as soon as we can,” Keppler said. “This area possesses a very robust wood basket and by growing our manufacturing footprint we can keep pace with the worldwide demand for biomass energy.”

The Northampton facility will benefit from grant support from the One North Carolina Fund, as did the mill in Ahoskie.

For additional information about the company, visit www.envivabiomass.com.

WINDSOR – An elderly couple found dead in their home Thursday were the victims of a murder-suicide. Bertie County Sheriff... read more