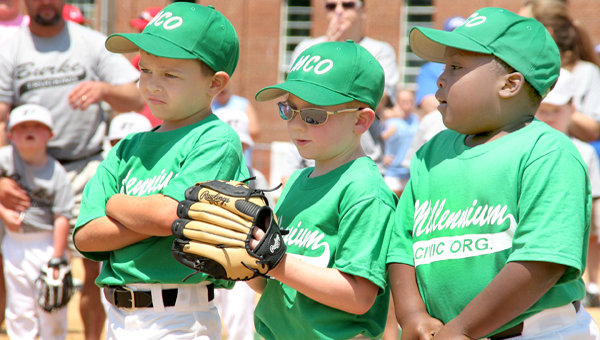 These Millennium Civic Organization players wait for the conclusion of the formal introduction of players to get their Coach-Pitch baseball season underway within the Aulander Youth League Association. Players from 11 teams were introduced Saturday morning as the local youth baseball/softball league officially began their 2011 summer season. Staff Photo by Cal Bryant

AULANDER – “Are you ready to play?”

A sea of brilliant colors lined the field at the local area’s second oldest ballpark as each of the 11 youth league teams, along with their coaches and “team moms” were formally introduced to a large crowd gathered in the stands.

Drew, who serves as president of the league, said 2011 marks a record year for the Association, one that has seen 154 youngsters (ages 5-18) sign-up to play from now through the end of July.

“I promise not quit as long as the children of our community and our area want to come here to learn about the games of baseball and softball and learn about life,” Drew said. “I thank God for giving me to health and the strength to work with our youth. We want their involvement with this league to become a lifetime memory.”

But to provide those lasting memories, the local children first needed a place to play. That effort began in earnest in the fall of 2006 where members of the Aulander Ruritan Club began discussing ideas to start-up a youth baseball/softball league. A lot of hard work went into that project, an effort that not only restored the playing field to immaculate condition, but added a press box, concession stand and restrooms as well.

The field was christened in 2008, named in honor of the late John Drew who dedicated his adult life as a coach and teacher of the game of youth baseball.

Aulander Mayor Larry Drew gave remarks during Saturday morning’s ceremony. He praised the work of the Aulander Ruritans to breathe new life into what was once a proud part of Aulander – youth baseball/softball. He also offered words of thanks to the many local sponsors that made this dream become a reality.

“It’s through their efforts that this field is back in the shape it is today and the reason this youth league is so successful,” Mayor Drew said of the Ruritans’ work and the support of the many sponsors.

In a continued effort to build on what is now a four-year-old foundation, Mayor Drew said the Aulander Youth League Association has been formed. He encouraged parents of the young players to become a part of that Association.

“As we start our fourth season, I take great pride in how well we’ve worked together to get to this point,” Mayor Drew stated. “Sometimes we seem to lose our focus, but when we do we always have someone to step up and remind us all that this is not for us, but rather for the children.”

Mayor Drew encouraged all adults watching or coaching in the games over the next two months to be mindful of why they are there…to display sportsmanship and set a good example for the youngsters.

“Our goals for this league are, in order, safety for all those within this ballfield, especially the youngsters, sportsmanship, learn how to work as a team and to provide a positive environment for all to enjoy,” the Mayor added.

Mayor Drew closed by saying, “Look at the faces of these players and these coaches and see the excitement of a new season. It’s great that this community has pulled together to provide this opportunity. It’s great to watch a young player develop lifelong friendships that started right here on this field. It’s great to see them develop confidence and build self-esteem. It’s great to see them learn life’s lessons, that of sacrificing their personal desires for the good of the team.”

Each of the teams were introduced to the large crowd gathered in the stands. Those teams, introduced by league were as follows:

“These men have meant a lot to me and have meant a lot to the town of Aulander for a long time,” Billy Drew said.  “They played here on the Aulander High School baseball team and later with the Aulander Firecrackers. They convinced me that baseball was a good game to play. They passed it on to me and now I, along with so many others involved in this league today, are passing that legacy on to these young people.”

The Arthur W. Perdue Foundation presented a check to the Pitt County Chapter of the American Red Cross for $10,000... read more