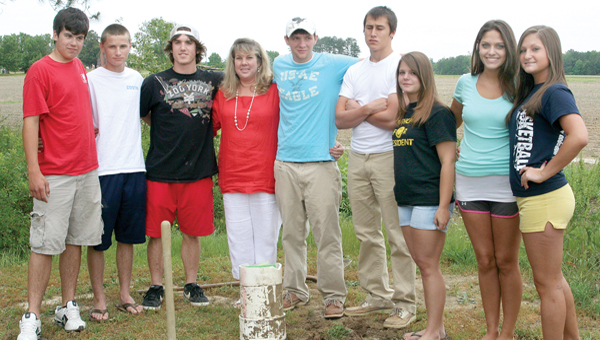 For more than a decade those memories were tucked away in a time capsule beneath the Northampton County soil, but on Thursday that all changed.

The eight seniors are now preparing for graduation, but in 1999 they were in Kindergarten and just beginning their school years at the Lasker-based school.

Twelve years ago, Lisa Burke, the mother of Ryan, and volunteer Librarian Susan Pope, who is also the mother of James, approached Wood about the project.

“I thought it would be cool to do this in Kindergarten and dig it up in their senior year,” Burke said.

The time capsule was made by Marvin Angell and was donated by Bill Burton, president of Narriof Industries.

Wood agreed to the capsule and had her class of, then, 11 children (Taylor Martin, Lansdell Edwards and Douglas Cherry moved or switched schools) bring items to place inside. Furbys, toy tractors, Beanie Babies, dinosaurs and photographs of friends and pets were among the numerous items placed in the container and was buried out back of the school.

Approximately one month ago, Burke and Pope came together and began to plan for the students to uncover the capsule—only there was one problem—no one remembered exactly where it was.

“We thank Becky Turner who came out with her (3-D metal detector) to find the time capsule,” said Burke.

Pope said this year’s Kindergarten class will reuse the time capsule to place their own items inside of the container. The class also planted a dogwood tree in the hole where the capsule was removed.

The students were a buzz in chatter as they busied themselves digging up the container.

“I thought it was bigger,” said Allen as he unearthed the time capsule.

At first, despite a few good efforts by the “strongest” of the bunch, the time capsule’s twistable lid didn’t budge. Finally, after a few knocks of a shovel, the top opened to reveal the items though a little wet and…smelly. Water had some how leaked through the capsule, soaking and ruining a majority of the items inside.

However, one by one, the memories came back through Kindergarten school photographs and soggy papers with small, paint laden handprints, each bearing the names of the students.

Taylor Cocke said she remembered the time capsule as being a little bigger as well, but it was the photos and the toys that she remembers being place inside.

“I (remember) the picture of the girls (in the class) and the Furbys,” she said.

Allen said he couldn’t remember burying the capsule, but thought perhaps the small toy tractors were placed inside by him.

“It was alright,” he said of the opening of the capsule. “It reminds me of the younger years and good times.”

That nostalgic feeling wasn’t reserved for just the students as Wood had her own memories to recount.

“When I look at them (the seniors) I remember that,” she said pointing to Kristen Taylor’s current Kindergarten class at Northeast that had come to join the seniors.

Wood said she also remembered the Furbys as they would often start talking during nap time.

Taylor said her class will be burying their own time capsule next week, complete with toys, letters and tide dye shirts. She said a new time capsule may be used due to the previous one being damaged during the seniors opening it.