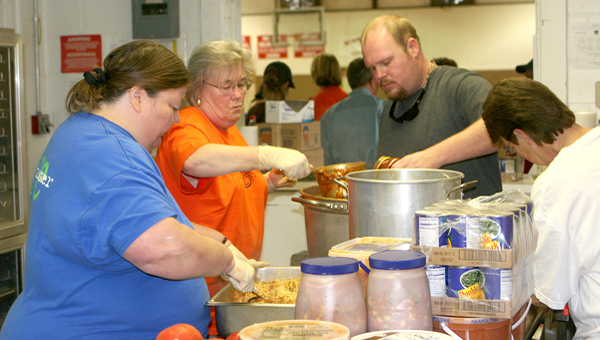 ASKEWVILLE – It’s the Christian thing to do.

That’s how members of Askewville Assembly of God, Askewville Baptist Church and United Outreach Ministries felt when they went to work helping victims of Saturday’s tornadoes.

“Being Christlike means that you help people – and especially those who are hurting,” said the Rev. R.O. Denton Jr., Pastor of Askewville Assembly of God. “We have a lot of people that are hurting and helping them is what Christians should be about.”

“We’re here because this is what we do,” he said. “These are our people. The first thing after the storm was to make sure everyone was alive and accounted for.

“Sunday morning, when the sun came up, we started working on how do we meet their needs,” he said.

“The main reason we’re here is that one of the greatest commandments of Jesus was to clothe the naked and feed the hungry,” he added.

Sunday morning, both churches in Askewville began planning to see what could be done.

“This church (Askewville Assembly) was sitting here Sunday morning planning what they could do and we were doing the same thing at our place,” Rev. Crumpler said. “Afterwards, we began talking and decided it was the right thing to work together.

“We never even contemplated not doing this together,” he added. “We have two churches in this town, but there is no competition whatsoever. We’re together in the family of God.”

One of the quick decisions was to start feeding those who lost their homes and those who were working to clean up.

Laura Hoggard, a member of Askewville Assembly, had the idea during the church’s early service.

“When we rode through there and saw the devastation and saw people who lost everything; they have nothing left,” she said. “We have a school that had electricity and we have a kitchen. You can’t do a lot, but you can feed people and that fills a great need.”

With just a few hours notice Sunday, people began working in the kitchen at Bethel Assembly Christian Academy’s gym and fed nearly 500 people in the community for lunch and another 300 for dinner.

The volunteers prepared breakfast, lunch and dinner Monday and Tuesday and served approximately 1,000 meals during the day.

Hoggard said the meals would continue as long as they are needed.

“I talked with Pastor (Denton) and he said as long as there is a need, we’ll continue,” she said. “We have crews coming in this weekend and they will need to eat, so we’ll be here to help them.”

In addition to meals, there are clothes and other supplies available to those in need.

Those items are available thanks to the work of United Outreach.

“We actually started a clothing drive during the flood in Windsor,” Rev. Thomas said. “The donations we received developed into a ministry so we were already set up and prepared to do this for people who have lost everything.”

Volunteers have been abundant. Those who were helping lead the ministry were not surprised.

“Our community is torn apart – at least a portion of it,” said the Rev. Webb Hoggard, Associate Pastor of Askewville Assembly. “It is important that we be the hands and feet of Jesus and lend a hand to those who can’t help themselves right now. That’s the kind of community we are.”

Volunteers said they were glad to be helping.

“It’s the Christian thing to do,” said Gloria Bryant. “I had an example with my father and my mother. They always said when someone is in need of something, you do it. This is where I need to be.”

Vonda Harden said she was thankful for the safety of her family and close friends and that helped make her even more motivated to help.

“I felt so fortunate,” she said. “My family and most friends were spared. I’m thankful to be part of something that is bigger than me. The Lord has blessed us and we want to give back.”

Harden said the most amazing part of the volunteer work had been hearing the stories.

“They are ‘God stories,’ not just good stories,” she said. “We’ve heard so many stories of God intervening.”

She also said she was proud of the community.

“I’m proud of our church, our sister churches and everyone,” she said. “I wouldn’t live anywhere else.”

Melody Johnson said she knew lending a helping hand was what she should be doing.

“This is what we do,” she said. “I’m thankful for my blessings and I want to give back. I never considered doing anything else.”

She said the three churches working together made it even better.

“You have a non-denominational church, Assembly of God and Baptist all together and that is awesome,” she said. “I think God is trying to tear down barriers whether it’s denomination or race or whatever. This is a good example of that happening.”

The group of volunteers also included teenagers who were working to help their community.

“I want to help those families who have lost everything,” said Kristen Adams. “I think it’s the Christian thing to do and I wanted to do what I could.”

Marky Palmer, another teen who is volunteering, said he enjoyed helping those in need.

“I hate the situation, but I love helping people,” he said. “I felt like volunteering was the right thing to do.”

Having volunteers from all three congregations and many more from the region has been heart-warming to those involved.

“There has been a tremendous amount of coordination between the three churches as well as Samaritan’s Purse and the Baptist Men,” Rev. Crumpler said. “In some communities, churches appear to be against each other, but that doesn’t happen here.

“It’s exciting,” he added. “What pleases me is that we’re not hearing ‘somebody needs to do,’ we’re hearing more of ‘what can I do.’ There are neighbors, relatives and friends just showing up and going to work.”

“I think it’s a picture of the body of Christ,” he said. “We have created divisions based on theological beliefs and I understand we have different beliefs. There are more things we agree on than we disagree on, though and I think that is coming through with this effort.

“This is a picture of what things are supposed to be like,” he stressed.

Rev. Thomas added, “It’s been awesome. I think it is what God sees His church as being anyway.”

In the end, it is about doing what is right for friends and neighbors.