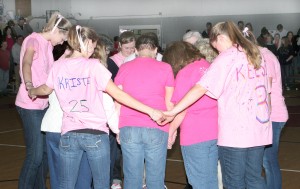 ASKEWVILLE – They’ve been held all over the country, but it was a first in Askewville.

Tuesday night, the coaches and players for Bethel Christian Academy’s varsity girls sponsored a PinkZone game. In the process, the team elevated awareness about breast cancer, honored survivors of the disease and raised money for the Kay Yow Cancer Fund.

“This is a cause that’s dear to my heart,” Bethel Assistant Coach Lyndal White said. “I am a lifelong fan of N.C. State and Kay Yow. I also have lost a family member and a dear friend to breast cancer.

“When I started coaching, it’s something I knew I wanted us to do and our Head Coach, Ashley Byrum, was all for the idea,” she continued. “As we started planning, we found out just how many lives the disease has touched at Bethel Christian Academy, Askewville Assembly of God and our community.”

The varsity girls basketball team of the school quickly took to the idea in large part because one of the members of that unit – junior Charitee Dunlow – had a mother who had battled the disease.

“It’s really special because it was a tough time for me to go through that with my mom,” she said. “It means a lot to me that my teammates, coaches and school are supporting my mom and others who have faced cancer.”

Her mother, Sherry Dunlow, was one of those honored at the game, but received a special honor from the Lady Eagles. Each of the Bethel varsity girls wrote “Sherry” across the sleeve of their pink warm-up shirts.

“It means a lot to have the kids doing this,” Dunlow said. “It’s very good for young people to become aware of this disease and I think it’s awesome that they’ve done this.”

Dunlow said the game was a good way for the student-athletes to see that their peers had mothers or grandmothers who had battled the disease.

“It always helps to know that you are not alone,” she said. “You don’t know what someone is going through until you’ve been through it yourself.”

As for having her daughter involved in the event, Dunlow said it made it even more special.

“It really means a lot,” she said. “It’s not something she talks about with me a lot, but now I get the sense that she may talk to others about it.”

The game wouldn’t have been possible without the help and cooperation of Bethel’s opponent – Pungo Christian Academy. PCA Athletic Director Melanie Sawyer said it was the second time this season her team had been part of a PinkZone event.

“We played in one at Terra Ceia Christian School as well,” said Sawyer, who wore pink while coaching the Lady Raiders. “I believe in supporting the cause any time you can because everyone has had someone in their life that has battled cancer.”

While the Lady Eagles led the awareness event, the varsity boys of Bethel also got into the spirit of the game. Several of the young men wore pink wrist bands, head bands, socks or shoe strings.

One of those young men, junior Daniel Feher, also wore a pink tie before the contest. He said it was his way of remembering his late grandmother, Mary Lou Feher.

“My grandmother passed away from breast cancer before I was born,” Feher said. “I wanted to do something to remember her.”

The coaches of the Bethel varsity boys – Tommy Tripp and Marky Hoggard – also wore pink for the game.

“My mom is a survivor,” Hoggard said. “She had breast cancer and went through the treatments and is doing well now, but it is absolutely something I wanted to support.”

Tripp said he believed in supporting the cause as well.

“Cancer affects so many people,” he said. “I think it’s always right to support good causes. With the battle that both NC State coaches – Jimmy Valvano and Kay Yow – went through, I think it’s fitting that we as coaches support this cause.”

During the halftime of the varsity boy’s contest, the ladies who had survived breast cancer were brought to center court where they received a standing ovation from the crowd.

The Rev. R.O. Denton Jr., pastor of Askewville Assembly of God (the parent church of the school) led prayer for the survivors while the Lady Eagles gathered around the survivors and held hands.

After the ceremony, Rev. Denton said he was pleased to see the school involved with such a ministry.

“First of all, the whole philosophy of the school is giving,” he said. “We gave to Coach Joe Mizelle (the varsity boys coach who is sick) and now we’re involved in this event.

“There are all kinds of ways to give and the Bible says give and it will be given to you,” he continued. “I think it’s nice to see these young people giving and getting involved in ministry.”

“When you look at the survivors and those who have been impacted by cancer in general and breast cancer specifically in this area, you see it is very common,” Howerton said. “I am proud to see our sports teams reaching out to support those who have battled this dreaded disease.

“I told Pastor earlier that I think this is the direction for our sports teams,” he added. “The kids see that there are bigger and better things than playing a game. It’s ministry and to involve these kids in ministering as they have here tonight and did with Coach Joe is amazing.”

Howerton said he believed the school would be blessed for their ministry.

“I believe the Lord will bless the school and the sports department for the attitude of ministry I see,” he said.

The event raised more than $300 for the Kay Yow Cancer Fund, which is an arm of the Jimmy V Foundation. The Cancer Fund helps raise funds to fight cancer that attacks women.

“What Kay Yow did allowed me to do what I do,” Sawyer said. “I wouldn’t have been able to play sports in college and come back to Pungo and coach if it hadn’t been for Kay Yow and (University of Tennessee Women’s Basketball Coach) Pat Summit and people like them. The girls wouldn’t have had a chance to play.

“I think anytime you can support the Kay Yow Cancer Fund, it’s something you should do,” she said.

The coaches at Bethel agreed.

“Kay Yow is someone I admired and respected all of my life,” White said. “Anything we can do to help stop the disease that eventually took her life I will be a part of.”

By Thadd White Sports Editor Three decades ago it would have seemed like a pipe dream. When Charles Simmons took... read more