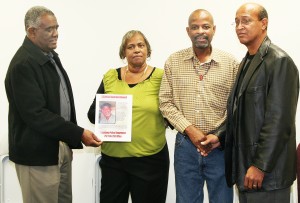 Carolyn Jones and her brother, Calvert Watson (both in center), met Friday with Northampton County Sheriff Wardie Vincent (left) and Garysburg Police Chief Raymond Vaughan in an effort to solicit the public’s assistance in finding the person or persons responsible in the Jan. 24, 2010 death of Thomas Charles Watson. Staff Photo by Amanda VanDerBroek

GARYSBURG — It’s been one year since Thomas Charles Watson was murdered, but for his family the pain of losing him still exists in each moment of every day.

On Friday, members of Watson’s family along with law enforcement officials gathered at the Garysburg Police Department to ask for the public’s help with information about Mr. Watson’s death.

Additionally, Northampton County Sheriff Wardie P. Vincent and Garysburg Police Chief Raymond Vaughan announced the reward for information leading to the arrest and conviction of the person or persons responsible has been increased to $10,000.

On the evening of January 23, 2010, Mr. Watson, 58, was found unresponsive on Apple Street. He had sustained a head injury, one that would lead to his death in the early morning hours of the next day.

“I hope they’re (law enforcement) still searching and I hope they find who did this to daddy,” said Carita Watson, one of Watson’s five daughters, via telephone. “It’s been a year now and the pain is still there for the family. …He was a good father, a hardworking father and who ever did this, they didn’t have to do it.”

Watson’s brother and sister, Calvert Watson and Carolyn Jones, remembered their brother as a fun-loving community and family man who regularly attended Chapel Grove Church. Watson worked for many years until he became disabled. He then spent his time doing odd jobs around the community.

“He was a type of man that loved to have fun, make you feel good and laugh,” said Calvert. “It was always about the other person (for my brother).”

Jones recalled Thomas as being a bit of a teaser, but in the end he would always make it up to his targets.

“He would always say something to lift you up,” she said.

One year into the investigation the case is at a stand still, but local law enforcement is not giving up on finding Watson’s murderer or murderers.

“Right now there are no definite leads,” said Chief Vaughan. “We’re waiting on information from the public or other evidence to be found.”

Vaughan, who knew Watson personally, said he hopes with the family and law enforcement reaching out to the public it will help to bring forward those individuals with valuable information.

“Mr. Watson was well-known in the community, I was a close friend to him,” he said.

Sheriff Vincent said the case and evidence will be reviewed to see if anything has been missed, but at the same time they are trying to drawn public interest.

In March, a governor’s reward, funneled through the State Bureau of Investigation, offered $5,000 for information. That initial reward was increased to $9,000 thanks to donations from the community.

Meanwhile, the Watson family is doing their part in keeping their brother and father’s murder in the forefront of public consciousness.

Calvert Watson said a candlelight vigil is planned for 7 p.m. on Monday at the corner of Apple and Pine Streets near where his brother was found.

Calvert also spoke of the need to get the person or persons responsible for his brother’s death off the street.

“Things like this cannot be solved without community support,” he said. “You never know who may be next. I’m sure if it were any one else, (your) brother, sister, they would like for it to come to an end.”

The latter, Calvert believes will eventually happen and his brother’s murderer or murderers will be brought to justice.

“Whoever is responsible for this, they may think they have gotten away, but God is watching,” he said. “Whenever you do wrong it will come out.”

Jones said it’s been hard since her brother was killed and she prays someone will come forward with information.

“I still…I miss him,” she said. “I hope this will come to an end. I hope this interview will touch some body.”

The Roanoke river Center on US 17 Business is among the three options under consideration by the Windsor Board of... read more