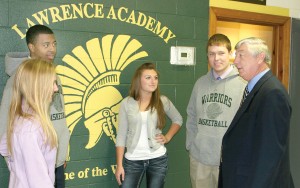 Students at Lawrence Academy are taking time to get to know their new Headmaster. From left, students Hallie Corbett, Travis Whitehead, Giovanna Conigliaro and Chase Stevens visit with Thomas Gregory, who started his second tour of duty with the school Monday. Staff Photo by Amanda VanDerBroek

MERRY HILL – On the sidelines, he was referred to as “Tom Terrific.”

In the hallways of Lawrence Academy, it was simply “Mr. Gregory,” but that was more than a decade ago.

In 1986, Lawrence Academy was a school in need of leadership. They turned to Thomas Gregory, who had spent time as Headmaster at Chowan Academy and then served as Athletic Director for the Warriors.

He spent the next 14 years guiding Lawrence Academy to one of the premier independent schools in the region.

“People used to come here when they wanted to see foresight and vision,” Gregory said.

In the 10 years that have passed since he retired due to health reasons in November of 2000, Lawrence has gone through four headmasters and three interim Heads of School.

Looking to regain long-term stability, the Lawrence Academy Board of Directors appointed Gregory as Headmaster of the school he loves last month.

“The school has been struggling with stability,” Gregory said Tuesday, his second day back at the helm of the school. “My life was here – a lot of it. My heart was here and always has been. I still have a lot left to give.”

That’s why after 10 years as a Real Estate Agent and retired educator; Gregory is back in the office he called home for some 14 years.

Gregory said some of the things in place at the school now will give him a head start as he begins his second tour of duty.

“The school was recently accredited (by the Southern Association of Independent Schools and the Southern Association of Colleges and Schools), there are leadership roles in place which will give me more time as Headmaster to grow the school and reach out to those who can help us,” he said. “I want to bring back the revered place Lawrence Academy once held. They came here to see what we were doing. I’m sure they still do, but we have to make it even more so.”

As he begins his new charge, Gregory said approximately half of the staff was the same as when he left the school.

“I’ve gotten a very positive reception from the staff,” he said. “As for the students, I’m still getting there. Their time is coming.

“Right now I’m trying to understand the positive changes that have taken place and see how the school works differently than when I was here 11 years ago,” he said. “I’m meeting the staff face to face and getting to know the students as much as I can.”

Gregory said he had two goals that were paramount as he resumes the reins of Headmaster at Lawrence. The first is to increase enrollment which will in turn provide opportunities to add more staff.

The second is to better meet the technological needs of the school.

“Technology changes so fast that it’s hard for any school to keep up,” he said. “It is something I feel we need to improve on, however.

Another key issue will be addressing a recent trend among Lawrence Headmasters. Many of the recent Headmasters have been concerned with budgets and foundation, but haven’t been as visible in the school.

Interim Headmaster Dr. Ed Clouse addressed that during his six-month tenure until Gregory was hired, but the new Headmaster said it is something he sees as imperative to correct.

“Visibility is my top priority,” he said. “I don’t think I was in my office for more than 15 minutes during the school day yesterday. I’ve told our staff, they may turn around at any time and see me standing there. I want to be part of what is going on every day.”

While he’s learning the new ways of the school, Gregory insists some things will not change.

“I’m also big on making sure the kids ‘want to’ instead of ‘need to;’” he added. “That’s important.”

Gregory said his first area of concern as he leads Lawrence will be financial.

“My biggest concern is meeting the financial needs of the school in the current national crisis recovery,” he said. “The answer to that goes back to my goals. We have to bring in more students.”

The new Headmaster also said he would work to bring back a family atmosphere to the school.

“I want us to have that family feeling,” he said. “All for one and one for all – that’s the way it should be.”

Gregory will have the benefit of quite a bit of experience as he tries to build Lawrence back to a 400-enrollment school.

In his time as Headmaster at Lawrence, Gregory guided the school to increase enrollment from 290 to 418 students. The staff size increased from 25 to 45.

The school also made updates in buildings, programs and athletic facilities during his tenure.

“The Board has confidence that Mr. Gregory will carry on the mission of the school, and we look forward to a long and stable relationship with Mr. Gregory as he takes over as head administrator of our school,” said Board Chairman Allen Castelloe.

The board chairman also thanked the search committee and Dr. Clouse.

“The Board would like to thank the search committee for their diligence and thoroughness in conducting the search,” he said. “Gratitude is also extended to Ed Clouse for serving as the interim head during this transition.”

Dr. Clouse remains at the school as Assistant Headmaster.