The Bears put on a showcase of how to win football games – scoring in just about every way as they routed visiting Pasquotank County High School 47-16. 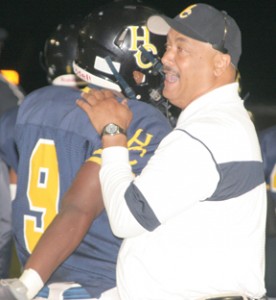 HCHS Assistant Coach Brian Moorings congratulates one of his players after the Bears scored Friday.

The final was never in doubt after the final three minutes of the first half, however, as HCHS scored three times in as many minutes to head into the locker room with a comfortable 34-8 lead.

The Bears were led by senior quarterback Petey Boone who threw a touchdown pass, ran for a score and returned two interceptions for scores.

Pasquotank had cut the HCHS lead to 14-8 with 3:33 remaining in the second quarter, but the close game was short lived.

On the ensuing possession, Boone called his own number and ran a quarterback draw up the middle. He raced 65 yards to paydirt and Brandon Warren added the conversion kick to make it 21-8.

HCHS skipper Scott Privott used a pair of timeouts on Pasquotank’s next possession to make sure his team got the ball back. He needn’t have worried though as Boone picked off a Kyle Odum pass and ran it back 37 yards for a score. The conversion failed, but the Bears led 27-8 with 1:57 to play in the first half.

Hertford County wasn’t through scoring in the opening half, however, as the Bears forced a three-and-out by Pasquotank. Privott used his final timeout to make sure the Panthers had to punt.

On that punt, a high snap forced the punter to try to pick up a first down, but the HCHS defense stopped him at the Pasquotank 17-yardline.

The Bears had one play to reach the endzone and make it count as Boone connected with Devin Vaughan who scampered 17 yards and dove into the endzone with 1.4 seconds to play in the second period.

Warren added the conversion and the Bears had a healthy lead at 34-8.

After the Homecoming festivities at halftime, the starting unit got its only series of the second half when the third quarter opened.

Boone engineered a 48-yard, six-play drive for the Bears. Vaughan capped the drive with a 22-yard scamper to paydirt and, with Warren’s kick, the Bears led 41-8.

A Hertford County fumble gave Pasquotank their only other score of the night when the Panthers drove 30 yards on 14 plays. Odum had the scoring run on a three-yard plunge. Devonte Cummings added the two-point conversion and the Panthers closed to within 41-16.

The Bears added one final score when Antonio Futrell blocked a Pasquotank punt late in the contest. Dorrien Askew picked up 16 yards on the next play and then freshman Kevin Privott scored on a two-yard run with 1:29 to play. The kick failed, but the Bears led 47-16.

From there, the game ended with Pasquotank in possession of the ball.

Hertford County scored first in the contest when Aaron Thomas struck paydirt from 19 yards out. That capped a four-play drive that covered just 27 yards. Warren’s kick made it 7-0 with 3:37 to play in the first quarter.

The Bears upped their lead to 14-0 when Boone intercepted a pass and returned it down the visiting sideline 65 yards to the endzone. Warren’s kick made it 14-0 in favor of the home team.

Pasquotank finally got in the endzone seven minutes later when Jaquan Respass rumbled 38 yards to paydirt. Cummings added the conversion to close the gap to 14-8, but that’s when the Bears exploded.

Hertford County had 220 yards of offense with 202 of it coming on the ground. Boone led all rushers with 61 yards on six carries despite only playing for slightly more than half of the contest. He also threw for 17 yards on 2-of-3 passing.

Neil Outlaw had 54 yards rushing for the Bears while Thomas added 47.

The Panthers managed 206 offensive yards with 174 coming on the ground.

The win boosted HCHS to 6-3 overall and 3-1 in the Northeastern Coastal Conference. The Bears will take next week off before hosting First Flight on October 29.

JACKSON – Northeast Academy grabbed an 8-1 win over Lawrence Academy to improve to 7-6 on the season. The Lady... read more